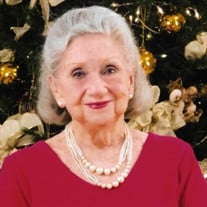 Eleanor Adeline Gage Diamond, of Sarasota, Florida, died peacefully after a brief illness, on March 20, 2021 in Bradenton, Florida. She was 91 years old. Eleanor was born on February 20, 1930 in Pensacola, Florida, the daughter of Naval Air Cdr. Fred Harrison Gage and Anna Elizabeth Bell Gage; both preceded her in death. Eleanor was a member of the 1950-51 debutante coterie of Jacksonville and was formally presented to society at a tea dance held at the Officers club in Jacksonville, Florida. She designed her own gown. Eleanor graduated from Florida State University in 1952 with a BA in Fine Art. She later returned to the university to obtain a Teaching Certification. She was a member of the Gamma Phi Beta sorority (Beta Mu Chapter) and she held the office of vice-president her senior year. It was here she met her lifelong, devoted friend, Fay (Miller) Hardy. Eleanor married John Dewitt Diamond at the Christ Church parish in Pensacola, Florida on June 4, 1954. In earlier years, they lived in Pensacola, Jacksonville and Puerto Rico. They had six children. Eleanor had a love for her church. She was confirmed at the All-Saints Chapel on the Naval Air Station in Jacksonville, Florida on May 18, 1945. She took pride in knowing her grandmother (Merritt-Bell) donated land and a stained glass window to Christ Church in Pensacola. In 1958, Eleanor and her husband moved to Puerto Rico where they were members of the Episcopal Cathedral. During the years that followed, they were very involved, teaching Sunday school, cooking meals, doing charity work, etc. Eleanor and her husband then became founding members of the new church, St. Stephens Episcopal in Guaynabo, Puerto Rico. Eleanor and her husband divorced in 1972. In 1976, she moved her children to Sarasota, Florida where she built a new life for her family. Eleanor helped support her family working as a portrait artist, a substitute teacher at Commonwealth High School in Puerto Rico and McIntosh Middle School in Sarasota, and an associate at the Holiday Inn gift shop in Longboat Key and Fast Eddie’s on Anna Maria Island. Eleanor took pride in her family heritage. She loved sharing that history with stories, photos and heirlooms of past generations. A trip to England to explore some of that history was a highlight in her later years. Eleanor was a talented artist, known for her true-to-life portraits. She was the life of the party, an accomplished cook who enjoyed hosting parties and dancing. She will be remembered for her elegance and style, strength, artistic ability, witty humor, hospitality, her famous tiramisu and Christmas fudge, and her beautiful blue eyes. Eleanor is survived by two daughters, Lucy Merritt Diamond (husband Mark) and Laura Adeline Diamond; three sons, Mark Dewitt Diamond, Matthew Gage Diamond (wife Tam), and Paul Robinson Diamond (wife Janet); Seven grandchildren, Shannon (husband Warren), Fallon (husband Chris), Sean (wife Lauren), Christopher (wife Stephanie), Kathryn (husband Billy), Ocean (husband Jay Jose) and Pauline; 10 great-grandchildren, Raylee, Dane, Ryan, Alexis, Aiden, Titus, Reed, Maddox, Phoenix, and Lunna; her nieces, Susanne and Kathleen; nephew, Rusty; daughter-in-law, Nancy Thomas; lifetime friend, Fay Hardy; and many other friends and relatives. She was predeceased by her infant son, John Merritt Diamond, and brother, Cdr. Fred Harrison Gage Jr. A celebration of life service will be held at a later date in Pensacola, Florida where she will be laid to rest alongside family at St. John’s Cemetery. In lieu of flowers, memorial contributions can be made to the Bishop Gray Retirement Foundation, Inc., P.O. Box 233, Winter Park, Florida 32790.

Eleanor Adeline Gage Diamond, of Sarasota, Florida, died peacefully after a brief illness, on March 20, 2021 in Bradenton, Florida. She was 91 years old. Eleanor was born on February 20, 1930 in Pensacola, Florida, the daughter of Naval Air... View Obituary & Service Information

The family of Eleanor Adeline Gage Diamond created this Life Tributes page to make it easy to share your memories.

Send flowers to the Diamond family.