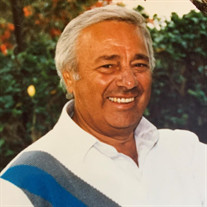 Elio E. Farese of Sarasota, Florida passed away peacefully on Thursday, August 5, 2021 at his home surrounded by his family, at age 93. Elio was born in East Cambridge, Massachusetts on March 25, 1928, one of four siblings of the late Raymond and Augusta (Virgilio) Farese. He was raised in East Cambridge and joined the Navy during 1945. Elio is a WWII and Korean War Veteran. Following his service, he had a long successful career in Real Estate and Development in the Boston area. He enjoyed an early retirement and became an avid golfer earning multiple hole-in-one trophies. He loved all music and had a great singing voice. After raising his family in Burlington, MA, he retired to Florida where he ultimately settled in Sarasota. Elio will be deeply missed, but his dedication to his family, his happy personality and sense of humor will be forever cherished by his family. Elio was the devoted husband of Terry Farese and father of Janice Mann & her partner Michael Bridges of Melrose, Elaine Coughlin & her husband Jack of Tampa, FL, and Carol Farese-Viola & her husband Mark of Melrose. Loving brother predeceased by Phyllis Weed, Jean Wright & Louis Farese. Cherished grandfather of Erin Coughlin, Bridget Lopez and her husband Jay, Michael Coughlin and his wife Heather, Kevin Coughlin and his fiancé Rachel Calhoun, Kaitlin Deluca and her husband Robert, Zoë Viola, and Zaden Viola. Proud great-grandfather of Clark, Reese & Rhett Lopez. Also survived by his many special nieces and nephews. Relatives & friends will gather in honor of Elio’s life during visiting hours at Toale Brothers Funeral Home, 40 North Orange Ave, Sarasota, FL on Wednesday, August 11th from 6 to 8pm, and Thursday, August 12th at 9:30am for his Funeral Service. Internment will take place immediately following at Sarasota National Cemetery. In Lieu of flowers the family would appreciate donations be made to Tidewell Hospice, 5955 Rand Blvd., Sarasota, Fl 34238 in Elio’s memory.

Elio E. Farese of Sarasota, Florida passed away peacefully on Thursday, August 5, 2021 at his home surrounded by his family, at age 93. Elio was born in East Cambridge, Massachusetts on March 25, 1928, one of four siblings of the late Raymond... View Obituary & Service Information

The family of Elio E. Farese created this Life Tributes page to make it easy to share your memories.

Elio E. Farese of Sarasota, Florida passed away peacefully on...

Send flowers to the Farese family.