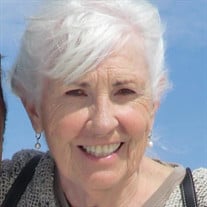 Ellen Mary Hui, 81, passed away on December 21, 2021, in Sarasota, FL. Ellen, better known as Helen, was born in New York City to Ellen and John Fealey on August 3, 1940. She grew up in Washington Heights, NYC, where she married her neighborhood sweetheart, became a homemaker, had three children, and moved to a house in Staten Island all by her mid-twenties. A divorce in her late-twenties led to major life changes. A tireless and selfless sense of duty & obligation to family, along with a herculean work ethic, would have Helen move to an apartment in the Bronx where she would pursue an associate degree at Bronx Community College (toward becoming a registered nurse). At one point, Helen was simultaneously going back to college, waiting on tables for income, and single-handedly raising three young children in the city. Ultimately, Helen became a registered nurse, and then worked at Columbia Presbyterian Hospital back in her old neighborhood of Washington Heights; she would eventually meet Dr. Robert Hui at the hospital. Helen and Bob would marry and become true partners in life. They retired to Sarasota, FL, and would remain devoted companions until Bob’s passing in 2004. Helen is preceded in death by her parents, Ellen and John; her siblings, Jack, Joseph, Theresa Becker; son-in-law Frank Lambertson; and her husband Bob. She is survived by her children Tara Boucher-Lambertson, Kevin & Jennifer Boucher, Glenn & Debbie Boucher, and grandchildren Sean, Nolan, Cole, and Dylan. Helen was a devoted wife and mother who was lovingly called “Nana” by her grandchildren. She was a compassionate woman who touched many lives and served as confidant and trusted advisor to many. She not only made many new friends in Sarasota, but also nurtured and maintained numerous relationships with extended family as well as friends from her old childhood neighborhood. She had a big heart, was truly loved by many, and will be sorely missed. Helen thoroughly enjoyed international travel and was fortunate enough to see much of the world as an adult; she never had it easy but managed to live an incredibly rich and fulfilling life. As a retiree, she also enjoyed giving back to the Sarasota community via many volunteer stints over the years. One of her favorite local causes was Goodwill Manasota; memorial donations may be made to Goodwill Manasota: https://experiencegoodwill.org/donate/ways-to-support/ The family wishes to extend gratitude to Sarasota Tidewell Hospice home care support (nurse Chris Cook in particular) for support in her final days – during which, Helen was in her own home surrounded by many loved ones. Visitation time will be held at Toale Brothers Funeral Home & Crematory, 40 N Orange Ave in Sarasota, FL, on January 8, 2022, at 10:30am. A brief memorial service will immediately follow at the same location starting at 11:30am. A link for remote attendance will also be made available; Helen’s preference would have been that folks take advantage of this remote capability rather than travel at this time. For those that do attend in person, full Covid vaccination is preferred, and masks & responsible social-distancing are required.

Ellen Mary Hui, 81, passed away on December 21, 2021, in Sarasota, FL. Ellen, better known as Helen, was born in New York City to Ellen and John Fealey on August 3, 1940. She grew up in Washington Heights, NYC, where she married her neighborhood... View Obituary & Service Information

The family of Ellen Mary Hui created this Life Tributes page to make it easy to share your memories.

Send flowers to the Hui family.