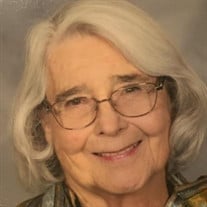 Emile Stingley Leighty, 84, went to be with the Lord on September 26, 2020. She was born on January 27, 1936, in Fayetteville, Arkansas, the daughter of Emil Herman and Gladys Margaret Sonneman. Besides her parents, she was preceded in death by her husband, H.D. (Ike) Leighty and her brother Bill Sonneman. Survivors include a son, Chuck Pearce (Linda) of Little Rock, AR.; two daughters, Robin (Tom) Sedley and Susan Baldwin, both of Houston, Texas. Three grandchildren, Christopher Pearce and Adam Pearce (Amberlie) of Little Rock and Alexa Pearce of Fayetteville, AR. Two sisters, Mary Kate (Bob) Arrington of Little Rock and Sarah Agee of Fayetteville; and many loving nieces and nephews. Emile was a graduate of Fayetteville High School and then initially attended Lindenwood College (now University) where she avidly pursued her passion of being an equestrian. In addition, she was an accomplished pianist and continued to play until her death. In 1955, she married LeRoy Pearce, and they had three children together. The family moved frequently with LeRoy’s advancement as a collegiate football coach, the last location of which was Miami, Florida where she obtained her Masters degree in Education. About that same time she became interested in and later impassioned with becoming an artist. She mastered multiple mediums, to include pottery, oil painting, textile collages, quilts and her favorite, and most challenging, water colors. She has won numerous art shows and has donated several pieces for charity auction. After marrying Ike Leighty in 2004, they settled in Waterloo, Iowa, and traveled extensively throughout the world, oftentimes in association with DOCA, Defense Orientation Conference Association of which Ike was a member. Ike and Emile wintered in Florida where she became a benefactor of Van Wezel Performing Arts and enthusiastically attended as many of the shows as possible. Upon Ike’s death, she moved permanently to Palmetto, Florida, continuing her relationship with Van Wezel, her art, and supporting many local charities. She will be missed by many and was a friend to all, often described as “never having met a stranger”. Memorials in her honor may be made to HOPE Chest, 1215 8th Ave W, Bradenton, FL, 34205

Emile Stingley Leighty, 84, went to be with the Lord on September 26, 2020. She was born on January 27, 1936, in Fayetteville, Arkansas, the daughter of Emil Herman and Gladys Margaret Sonneman. Besides her parents, she was preceded in death... View Obituary & Service Information

The family of Emile Stingley Leighty created this Life Tributes page to make it easy to share your memories.

Emile Stingley Leighty, 84, went to be with the Lord on September...

Send flowers to the Leighty family.