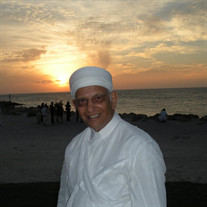 As the youngest of 11 children, Soli was in born in Tarapur, India to a priestly Zoroastrian family from Udvada. He joined the M. F. Cama Athornan Institute, where he completed all the requirements for becoming Navar, Martab and Saamel and was initiated as a full-fledged Mobed (Priest) in the Udvada Iranshah Atash. On completing his B. Chem. Eng. from the Bombay University, and M. S. and Ph. D. in Chemical Engineering from Northwestern University, Evanston, Illinois, Soli joined the Procter & Gamble Company in Cincinnati in 1964 and after retiring in 1994 to Sarasota, Florida, he worked as a partner in the Partnering Group for 5 years. On December 12th, 1965, Soli met his beautiful bride JoAnn on a blind date and 3 months later they were engaged. Married on July 2nd, 1966, they would celebrate their 55th wedding anniversary this coming July. An active member of the North American Mobed Council (NAMC) and Fezana, Soli performed Mobed duties all over North America. Soli was a pillar of his faith and loved teaching the younger generation the traditions and rituals. He started the first ever annual all Florida Muktad Gatha prayers in Miami, conducted numerous religious classes, and multiple teleconferencing ZRC Tele Classes. Soli published Weekly Zoroastrian Scripture Extracts with translation and audio recitations. He contributed countless articles in WZO Hamazor and FEZANA Journals. He was awarded the Outstanding Zarathushti Award by FEZANA in 2010, the Distinguished Scholar Award in 2018 from NAMC, and the Ervad Darab B. Unwalla Award for 25 years of dedicated service. Soli was an avid cricket player and accomplished golf player in his younger years and a superb tennis player until he was 80. Soli was also an active member of the Cincinnati Power Squadron for 19 years and served as Commander 1978-1980. Soli’s other loves included waterskiing on Lake Williamstown, Ky at the family “At Last Laumann” camp, long pontoon rides with Mr. Green and making (and giving) chutney which bonded him to so many strangers. He was passionate about helping anyone that asked. He was never far from his computer for reading, learning, and writing. He was Larger than Life and our Treasure. Soli is survived by his wife Jo Ann (nee Laumann); his twin daughters, Shirin (Marvin Simmons) and Anahita (James Hodge) and his beautiful grandchildren Cristina (Trey Cain), Allison; Taj, Zain and Nev as well as countless nieces and nephews in Cincinnati and India. Prayer Services will be held June 5th, 2021, at 1:00 pm at Toale Brothers Funeral and Crematory, 912 53rd Ave W, Bradenton, Fl 34207. In lieu of flowers, the family is requesting donations to Fezana’s Ervad Soli P. Dastur Memorial Fund (https://fezana.org/soli-dastur/) to support the upliftment of Mobeds in Udvada and their housing, health, and wellbeing needs; Or NAMC’s Ervad Soli P. Dastur Scholarship Fund - contact President Er. Arda-e-viraf Minocherhomjee [email protected] To view the video of the service: https://iplayerhd.com/player/video/54733dc9-8db8-40ed-8bc4-c3107b134851/share

As the youngest of 11 children, Soli was in born in Tarapur, India to a priestly Zoroastrian family from Udvada. He joined the M. F. Cama Athornan Institute, where he completed all the requirements for becoming Navar, Martab and Saamel and was... View Obituary & Service Information

The family of Ervad (Dr.) Soli Pirojshah Dastur created this Life Tributes page to make it easy to share your memories.

As the youngest of 11 children, Soli was in born in Tarapur,...

Send flowers to the Dastur family.