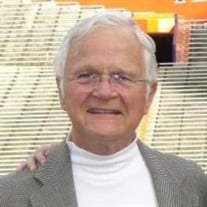 Ferdinand “Ferd” James Thompson, 83, of Sarasota, Florida, left this world suddenly on March 27, 2022. He was a loving and caring husband, father, grandfather, great grandfather and friend. He was a beloved member of the Thompson and Stoltz families and will be greatly missed by all. Ferd was born to Ferdinand and Anna Mae Thompson on July 21, 1938, in Altoona, Pennsylvania. He graduated from Altoona Catholic High in 1956 and attended Penn State Trade School. Shortly thereafter, he married his childhood sweetheart, Mary Anne Stoltz. Ferd and Mary Anne were married on February 15, 1958, in their hometown of Altoona. They added three wonderful children to their family; Ellie, Patrick, and Christopher. Ferd worked for Loral American Beryllium Corporation for many years which was then acquired by Lockheed Martin. He began as a draftsman, later becoming vice president of sales and marketing. As a result, Ferd had a lifelong passion for the aerospace industry. He was an active member of St. Martha’s Catholic Church where he frequently lectured. Ferd was also a member of the Skyway Corvette Club for many years. In addition to the church and the Corvette club, he participated in Boy Scouts of America. While involved in scouting, Ferd was presented with the Silver Beaver Award in 2011, the Live Oak Award in 2009, and the District Award of Merit in 2003. He was an active member of the Two Rivers Roundtable staff. Ferd enjoyed attending the National Boy Scout Jamboree and was proud to have been the most senior member recorded to attend. When he had free time, Ferd enjoyed golfing and traveling. He and Mary Anne were able to travel to many wonderful places all around the world. Of course, one cannot forget Ferd’s true passion, running the Thompson family popcorn truck. Ferd could be seen at many local events and fundraisers selling popcorn and cold drinks to folks of all ages. Ferd is survived by his wife of 64 years, Mary Anne, his daughter Ellie (Rex) Ingerick, his son Patrick Thompson, his four grandchildren, Heidi (Zack) McWeeney, Rex Ingerick IV, Christopher Thompson, and Andrew Thompson; as well as his great-grandson Rex Ingerick V. He was predeceased by his son Christopher, his sister Catherine Thompson Schwaab. A viewing is scheduled for Thursday, April 7 at Toale Brothers Funeral Home, 40 N Orange Ave, Sarasota, from 5-7 pm. A funeral mass will be held at Saint Martha’s Catholic Church, 200 N Orange Ave, Sarasota, at 1 p.m. on Friday, April 8, 2022, followed by a graveside service at Sarasota Memorial Gardens 5833 S Tamiami Trail, Sarasota. A reception will follow at The Showfolks of Sarasota, 5204 N Lockwood Ridge Rd. at 4 p.m. In lieu of flowers the family asks that donations be made to the All Faiths Food Bank or the charity of your choice.

Ferdinand &#8220;Ferd&#8221; James Thompson, 83, of Sarasota, Florida, left this world suddenly on March 27, 2022. He was a loving and caring husband, father, grandfather, great grandfather and friend. He was a beloved member of the Thompson... View Obituary & Service Information

The family of Ferdinand "Ferd" James Thompson created this Life Tributes page to make it easy to share your memories.