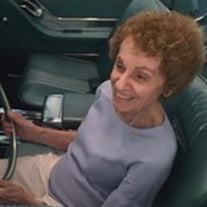 We remember with love and gratitude Frances Ann Schneider March 21, 1926 – May 17, 2022. Frances Ann Schneider passed away at Tidewell Hospice House in Sarasota, Florida on May 17, 2022, at the age of 96. She was born on March 21, 1926, in Detroit, Michigan to George and Zora (Magdewich) Hareff and was one of two children. Her birth parents died when she was very young, and she was adopted and raised by her aunt and uncle Daniel and Blanche (Kozolowski) Anastas. Fran married Louis Francis Schneider in 1949. Together they had six children and were married for 68 years before Lou passed away in 2017. They met in Michigan at a CYO (Catholic Youth Organization) dance in 1947 and after marrying, spent a lifetime together ballroom dancing, playing tennis, traveling, sailing their 32’ sloop ‘Nighthawk’, and raising their six children. They moved to Sarasota from Detroit in 1956 and originally rented a house on St. Armands Key. They resided in Detroit Michigan, Atlanta Georgia, Florida (Sarasota, Bradenton, & Tallahassee), and a short time in Saudi Arabia while Lou was teaching architecture at King Fausal University. They moved to Plymouth Harbor on Sarasota Bay in 2008, the retirement community that Architect husband Lou helped design in 1964. Although she grew up in Michigan, Fran always thought of Sarasota as home. Fran’s work with the League of Women Voters and The National Organization for Women illustrate her lifelong advocacy for women and their rights. She will be remembered as a devoted wife, loving mother, and loyal friend. She is survived by her sons Kurt and Greg, daughter Paula, two grandchildren, and three great-grandchildren. Frances was preceded in death by husband Louis, brother Norman, sons Franz and Bruce, and daughter Andrea. Due to Covid restrictions, there will be no memorial service. Contributions can be made in Fran’s memory to the Plymouth Harbor Foundation.

The family of Frances Ann Schneider created this Life Tributes page to make it easy to share your memories.

We remember with love and gratitude Frances Ann Schneider March...

Send flowers to the Schneider family.