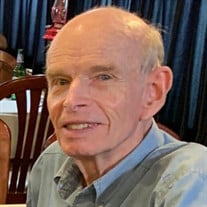 Frank Edgar Braden passed away on October 1 at the age of 80 after a six-month battle with Pancreatic Cancer. He was born on December 1, 1939, in White Plains, New York, the son of Frank Walter and Naomi (Laughlin) Braden, and spent his youth in Scarsdale, New York, and Cincinnati, Ohio. Frank was educated at Culver Military Academy and the University of Virginia where he graduated in 1961 with a BA, majoring in economics and foreign affairs. Following graduation, Frank joined the U. S. Navy and served two years as a gunnery officer aboard the aircraft carrier, USS Lexington, spending time in San Diego, Pensacola, and the Far East. He continued serving in the ready reserve and retired after 20 years with the rank of Commander. Following his active duty service with the Navy, Frank was hired by Marathon Ohio Company in Findlay, Ohio, where he served in personnel and finance positions over his 28-year career. While working at Marathon Oil, he met his wife, Ruth Philpott, and they were married in 1967. Frank was a member of the board and past president of CHOPIN Hall, an organization that provides food, clothing and other necessities to those in need in Findlay and Hancock County. He was also active in the Trinity Episcopal Church in Findlay and a member of the vestry. Frank and Ruth moved to Sarasota in 1999, where Frank became involved with the Caritas Food Pantry and directed the food ministry there until his recent retirement. Frank was also an active member of Church of the Redeemer where he served on the vestry, led Bible studies and served in many other capacities. Frank enjoyed world travel, classical music and reading, especially historical biographies. In addition to Ruth, his wife of 52 years, Frank is survived by his daughter, Christine Gilbert, her husband, Ken, and grandson, Jesse, of Columbus, Ohio, and by his son, Frank Walter, his wife, Tanya, and grandchildren, Finlay and Nina, of Auckland, New Zealand. A requiem mass and committal will be held at a later date. In lieu of flowers, donations in Frank’s honor may be made to Church of the Redeemer, 222 S. Palm Avenue, Sarasota, FL 34236 or to a charity of the donor’s choice.

Frank Edgar Braden passed away on October 1 at the age of 80 after a six-month battle with Pancreatic Cancer. He was born on December 1, 1939, in White Plains, New York, the son of Frank Walter and Naomi (Laughlin) Braden, and spent his youth... View Obituary & Service Information

The family of Frank Edgar Braden created this Life Tributes page to make it easy to share your memories.

Frank Edgar Braden passed away on October 1 at the age of 80...

Send flowers to the Braden family.