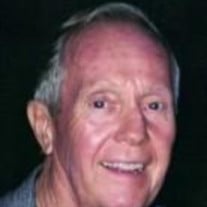 On Friday, September 4, 2020, Frank Pemberton Sarver, loving husband and father, passed away peacefully in TideWell Hospice House in Englewood, Florida at the age of 89, with his loving wife at his side. Frank was born on February 14, 1931 in Sidney, Ohio to Floyd and Wilda Jean (Stockstill) Sarver, living there until his retirement. Frank was known for his infectious smile and his kind and compassionate spirit. On August 15, 1981 he married the love of his life Pamila Ann Curtner, who survives him along with his sons Watso of Florida, and Mark & Bruce, both of Ohio. Frank was preceded in death by his father Floyd, his mother Wilda, and his brothers Paul and Richard. Following graduation from Sidney High School, Frank served in the U.S. Navy during the Korean War, based in Japan from 1950 until 1954. The discipline and patriotism he learned in the Navy never left him, as family and friends will readily attest. In 1991, after 34 years, Frank retired from the Stolle Corporation, and two years later, he and Pam moved to Venice, Florida. Frank had a passion for music as his parents owned Sarver Music Store which was, at the time, the oldest music shop in the state of Ohio. He mastered several instruments, playing the trumpet in his high school band. He enjoyed playing golf, and was also a member of the American Legion, B.P.O. Elks, and the Moose Lodge. An avid ;lover of the arts, Frank and Pam had season tickets to a number of theatres during their life together. The particularly enjoyed musical productions of many genres. Anywhere they went, if there was music, Frank and Pam were often the first couple to reach the dance floor. They also enjoyed going on cruises, delighting in the array of activities and fine dining experiences aboard the ships. The inurnment of his ashes will take place at Graceland Cemetery in Sidney, Ohio. Memorial contributions may be made to TideWell Hospice, Inc., 5955 Rand Blvd., Sarasota, FL 34238-9989, or to the charity of your choice.

On Friday, September 4, 2020, Frank Pemberton Sarver, loving husband and father, passed away peacefully in TideWell Hospice House in Englewood, Florida at the age of 89, with his loving wife at his side. Frank was born on February 14, 1931... View Obituary & Service Information

The family of Frank Pemberton Sarver created this Life Tributes page to make it easy to share your memories.

Send flowers to the Sarver family.