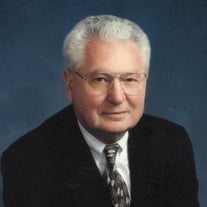 Fred Emil Mecklenburg Age at death: 84 Residence: Sarasota, FL Day and Date of death: Monday, April 6, 2020 Place of Death: Home Fred Emil Mecklenburg, a surgeon and clinical professor of obstetrics and gynecology, passed away April 6, 2020, at his home in Sarasota, FL. He was 84. Fred was born June 18, 1935 in St. Paul, MN, to Frederick and Dorothea (Swearingen) Mecklenburg. After graduating from South St. Paul High School, he graduated from the University of Minnesota in 1960 and the University of Minnesota Medical School in 1963. Following his residency in OB/GYN at the University of Minnesota, he completed an internship in Seattle, WA, and then served in the U.S. Army from 1966-1968. Fred practiced at St. Louis Park Medical Center in Minnesota until 1981, when he moved to Washington D.C., after being named chairman of Kaiser Permanente's OB/GYN department. In 1994, he became OB/GYN chairman at Inova Fairfax Hospital in Fairfax, VA, retiring in 2012. As a clinical professor of OB/GYN at George Washington University, Fred received many leadership, clinical and teaching awards, including the prestigious CREOG National Teaching Award from the American College of Obstetricians and Gynecologists. For many years, Fred volunteered his experience and expertise with Health Talents, making numerous trips to Guatemala with other health care professionals to perform much needed gynecological surgery. His colleagues from Inova Fairfax Hospital stated: “Fred is going to be missed by every member of the OB/GYN department that had the privilege to work with him. His style of leadership was rare. He led by example and in the gentlest possible way. Fred’s passion was surgery. The more difficult the case was, the quieter he got, conveying a great sense of confidence and calm. In all the years we knew him, we never heard him speak ill of anyone. Fred has passed on but will never pass out of our lives and fond memories.” Fred had a lifelong love of the outdoors, hiking, camping, canoeing, hunting and especially fishing. From his youth, fishing with his father and friends to teaching his sons, and on many trips to Canada, Alaska and the Chesapeake Bay, there were fish to be caught wherever he went. Above all, his wisdom, kindness, gracious and humble nature and genuine compassion for others will be tremendously missed. Fred is survived by his wife of 27 years, Barbara Moran, daughter Carol Mecklenburg (Jim Tisel), sons Karl (Kathi), Fred (Jill), and Eric Mecklenburg and 10 grandchildren (Sarah (Ryan), David, Luke (Julia), Kelsey (Mel), Jeff, Dalton, Greta, Bo, Amara and Griffin), and five great-grandchildren, sister Sue Tourville. He is preceded in death by brother Karl Mecklenburg and sister Sandra Cisneros. In lieu of flowers, donations may be made to: Dr. Fred E. Mecklenburg OB/GYN Education Fund #7000326, Inova Women’s Hospital, 3300 Gallows Rd, Falls Church, VA 22042 University of Minnesota Medical School Women’s Research Foundation (online z.umn.edu/womenshealthfund or by mail to University of Minnesota Foundation, P.O. Box 860266, Minneapolis, MN, 55486. (Please write "Women's Health Fund" in the memo line and include "In memory of Dr. Fred Mecklenburg.") Or Tidewell Hospice, Philanthropy Department 5955 Rand Boulevard, Sarasota, FL, 34238.

The family of Fred Emil Mecklenburg created this Life Tributes page to make it easy to share your memories.

Send flowers to the Mecklenburg family.