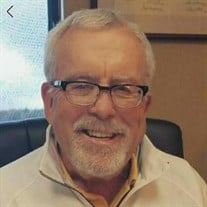 G. David Parent, named after his father, George, but commonly known as David or Dave, age 77 and a resident of Warwick, RI, died peacefully in his sleep on Saturday, December 4, 2021, at his winter home in Osprey, FL. David leaves behind his beloved wife of 54 years, Anne (Lewis) Parent of RI and FL, his son Christopher (Christine) and grandsons Joseph and Jacob Parent of Punta Gorda, FL, as well as several nieces and nephews in RI. Born in Pawtucket, RI, to George J, and Alice (Quinn) Parent, David received his education at Bryant University in Providence and his Chartered Life Underwriter and Chartered Financial Consultant designations from the American College in Washington, D.C. He was sole proprietor of a financial consulting business in East Greenwich, RI, for more than twenty years. David is a past-president of the New England Chapter of the CLU ChFC Society. All who knew Dave well would agree that his passion was for the sport (not a game to him) of golf. From the age of twelve, when he began caddying at Pawtucket (RI) Country Club, David lived, breathed, talked about, and played golf until health problems eroded his skills, eventually forcing him to stop altogether two years ago. Whether it was the history of golf, the architects and architecture of courses worldwide, the players, methodology, or best practices, Dave relished discussing any or all of these with anyone who shared his enthusiasm. He was a member of the Quidnessett Country Club of North Kingstown, RI, for the last fourteen years, and of the Potowomut Golf Course, East Greenwich, RI for the previous twenty-four years. He treasured the many friendships he cultivated through golf. David's interests also included history and economics, sports and sport history, classical music (particularly the more spirited and enigmatic composers such as Grieg and Rachmaninoff), and travel in Europe and the U.S. whenever it was possible. He read voraciously, most often historical biography, golf and other sporting publications, and three daily newspapers. Dave enjoyed living and boating on Greenwich Bay, RI, as well as spending the colder months in Florida. Winter visits to Florida began in the mid 1990's to visit friends and family, to play golf, and to explore communities up and down both coasts. tIn 2008, the couple bought a condo in Osprey, just south of Sarasota. When he began to have difficulty with stairs, they moved to a single-story villa in the same area in 2015. Funeral arrangements in Florida were private, via Toale Brothers Funeral Home. A Celebration of Life is planned for a future date in Rhode Island. Memorial gifts are suggested to https://Buttonhole.org, a 501(c) (3) public golf facility that welcomes Providence inner-city youth and other people of all abilities, with special emphasis on reduced rate lessons and play for children. David was instrumental in the founding of the organization. Alternately, donations can be made to the Leukemia and Lymphoma Society in his memory at https://donate.lls.org . David was a twenty-year lymphoma survivor. In either event, kindly use "GDavid" with no dots or spaces, as the honoree's first name.

G. David Parent, named after his father, George, but commonly known as David or Dave, age 77 and a resident of Warwick, RI, died peacefully in his sleep on Saturday, December 4, 2021, at his winter home in Osprey, FL. David leaves behind... View Obituary & Service Information

The family of G. David Parent created this Life Tributes page to make it easy to share your memories.

G. David Parent, named after his father, George, but commonly...

Send flowers to the Parent family.