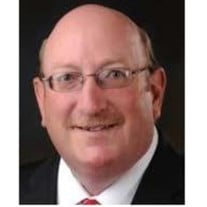 Gary M. Murphy, 58, passed away at home on April 7, 2021. Born December 9, 1962 in White Plains, New York to his Mother, Betty Murphy and now deceased father, Thomas Murphy. Gary spent his younger years in Maryland before the family moved to Texas, where Gary met his high school sweetheart, Karen. He attended Texas Tech University in Lubbock, Texas before his marriage to Karen. They settled in Arlington, Texas where they became avid Texas Rangers fans. Gary spent more than 20 years with Fidelity Investments in both Dallas and Denver; he also worked for TD Ameritrade both in Texas and in Sarasota, Florida, as well as managing the Charles Schwab office in Sarasota before venturing out into the Independent Investment Advisor realm. Gary is survived by Karen, his wife of 34 years; his mother, Betty Murphy of Belcamp, Maryland and brother, Kevin Murphy of Havre de Grace, Maryland; also survived by beloved aunt, Joan Schramm of Belcamp, Maryland, nieces Kelli Breighner and Kristin O’Keefe and numerous cousins and grandnieces. A celebration of life is planned for the near future. In lieu of flowers, donations can be made in Gary’s name to The Miracle League of Manasota whose mission is “to share the love of baseball with children, teens, and adults with disABILITIES.” 6050 Longwood Run Blvd., Sarasota, FL 34243 https://www.miracleleaguemanasota.org/

The family of Gary M Murphy created this Life Tributes page to make it easy to share your memories.

Send flowers to the Murphy family.