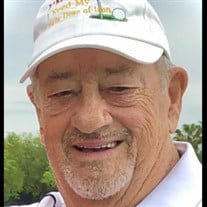 Gary E. Trudelle, 79, of Parrish Florida passed away suddenly on April 2, 2021. He was a loving husband, father, grandfather and great-grandfather. Gary was born in Keene, New Hampshire in 1941 to the late Wilfred and Lena (Nadeau) Trudelle. He was raised in Lowell, Massachusetts, worked and managed multiple area grocery stores. He met the love of his life Ellen (DeRoche) and they married in 1971. In 1975, they purchased and operated the North Billerica Market on Wilson St. in North Billerica, MA. This convenience store/deli served homemade sub sandwiches to local patrons, meatball being the most popular. They sold their house and business in 1984, and moved to Anna Maria Island, Florida. He bartended and managed popular local restaurants on the island. He brought smiles and laughs to his patrons he met from all over the world. His quick wit, humorous jokes and charming personality ensured a good time were had by all. He was an avid hunter, fishermen and golfer who took great pleasure being the captain of his boat. He enjoyed the opportunity to take others fishing and to enjoy sunsets on the waters around the island. He always cherished sunset dinners on the beach with family members and friends. He will be greatly missed and is survived by his beloved wife Ellen and his sister, Pamela Trudelle of MA. He leaves behind two daughters, Joanne Trudelle of NH, Belinda Wilson of CO, and a step-son, Kenneth DeRoche of MA. Between them they have eight grandchildren, Sherilyn Trudelle, Madison Wilson, Colton Wilson, Krystal Trudelle, Gary Trudelle Jr., Jason Trudelle, Dawson DeRoche and Dalton DeRoche. He was also the proud great-grandfather to Kyra Trudelle and Cody McIntire, as well as many nieces and nephews. He was the brother of the late Bernard W. Trudelle, and the father of the late Gary E. Trudelle Jr. Celebration of life services will be held in Massachusetts on a date to be determined later. In lieu of flowers, the family asks contributions be made in his honor to the American Heart Association. https://www2.heart.org

Gary E. Trudelle, 79, of Parrish Florida passed away suddenly on April 2, 2021. He was a loving husband, father, grandfather and great-grandfather. Gary was born in Keene, New Hampshire in 1941 to the late Wilfred and Lena (Nadeau) Trudelle.... View Obituary & Service Information

The family of Gary E. Trudelle created this Life Tributes page to make it easy to share your memories.

Send flowers to the Trudelle family.