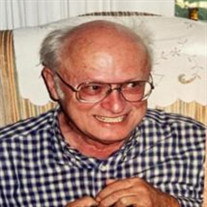 George Paul Prozzo passed in peace Friday late afternoon, August 6th at the age of 89 in Sarasota, Florida with family at his side. Born in Worcester, Massachusetts, George was the eldest son to George and Evelyn (Tully) Prozzo and grandson of family hailing from Italy, Canada, and Sweden in late 1800’s. Sadly, he was predeceased by his dear siblings Jeffrey T. Prozzo (2019) and sister Patricia (Prozzo) Frodigh (2018). George also joins his devoted wife of 60 years Joann (Peterson) Prozzo of Royalston, Massachusetts (2015) with their precious son Eric John Prozzo (1966).With so many reunited, we can be sure that that there is laughter, song, cheese and crackers and probably a good game of cribbage happening somewhere beyond. George grew up in Worcester during the Depression and as a teen, he helped his family by delivering newspapers and selling shoes at the downtown Florsheim store. His favorite courses at Worcester Classical High School were math and physics where he was also known for his humour and flashy ties. George matriculated to Worcester Polytechnic Institute specializing in electrical engineering earning him the nickname "Double E". Music was always a part of his family, and George played piano and sang bass in the choir at Trinity Lutheran Church where he met his future wife, Joann. They married in 1955 and honey-mooned in Salzburg, Austria (courtesy of the US Army). After his military service, George worked in the emerging world of transistors and semiconductors with the Sangamo Weston raising his family mostly in Springfield and Rochester, IL, eventually moving to Sarasota in 1978 when George joined Fairchild Weston Schlumberger Group’s Data Systems Division. George was very active at St. Paul, Holy Cross, and Faith Lutheran Churches devoting much time as a choir member, councilperson and sometimes assistant gardener with his wife. He was a member of the Cory B. Fish Masonic Lodge in Sarasota and of course, a lifelong Red Sox fan. George is mourned by his dedicated children: son David (Susan), and daughters Lisa, Kristina and Rebecca. He also leaves his cherished grandsons Jonathon (Kalia) and Jeremy, step granddaughter Atalie, and nieces and nephews: Deborah, Roland, Sue, Aimee, Nathan and Anya. George was a force of nature with a generous heart and touched many lives behind the scenes. His family meant everything to him, and he was deeply proud of them all. We will always be thankful for the gift of his life. “May flights of angels sing thee to thy rest”, Dad. We love you. A memorial service will be held at Faith Lutheran Church after Sunday service, November 14th

George Paul Prozzo passed in peace Friday late afternoon, August 6th at the age of 89 in Sarasota, Florida with family at his side. Born in Worcester, Massachusetts, George was the eldest son to George and Evelyn (Tully) Prozzo and grandson... View Obituary & Service Information

The family of George Paul Prozzo created this Life Tributes page to make it easy to share your memories.

Send flowers to the Prozzo family.