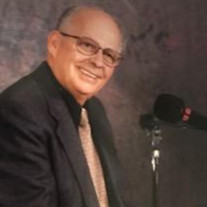 On August 8, 2021, Glenn Slabaugh, devoted husband and father of three, left this world at the age of 87 surrounded by his family to be with God. Glenn was born in July of 1934 in Holmes County, Ohio to Monroe and Helen Slabaugh and raised in the Brethren in Christ Church. He was a military veteran who proudly served in the United States Marine Corps during the Korean War. On December 5, 1959 he married Dorothy Kay Kennedy. They raised three daughters, Laura, Anita, and Alice. By trade he was an automobile body repair expert who came to Florida in 1971 to manage an auto body service department for Chrysler, then owning and operating an auto body repair business for a combined forty five years. Glenn had a passion and talent for music. He was a natural musician and vocalist. He was self-taught and admired for his gift to skillfully play many instruments including the accordion, organ, double upright bass (which he played to entertain troops while in the Marine Corp as a member of a military jazz band), bass guitar, and his favorite, the piano, and he sure could play! He shared his love for the Lord through his music and song at various venues such as a prison ministry with his friend Marc Schlabauch, as a member of the Lighthouse Quartet, Shining Light Ministries, and Sunday church services. He is survived by his wife of 61 years, Dorothy Slabaugh, three daughters, Laura Harrison, Anita (David) Touring, Alice (Allen) Rummel and his six gradchildren, Allen III, Austin (Melissa), and Alec Rummel, Garrett, Grace, and Emily Touring. He is also survived by his sister Alice (Llyod) Hershey, and two brothers Norman (Leona) and David (Mary) Slabaugh. He was preceded in death by his parents, Monroe and Helen Slabaugh, sisters Ruby Miller and Sylvia (Kenny) Kerby, his brother Mark Slabaugh and son-in-law Michael (Laura) Harrison. Visitation will be held on Tuesday, August 17, 2021, 4pm - 6pm, at Toale Brothers – Ewing Chapel, 140 East Venice Avenue, Venice, FL 34285. Funeral service will be held on Wednesday, August 18, 2021, at 10:00am, at Harvest Chapel, 225 Center Road, Venice, FL 34285. He will be laid to rest at the Sarasota National Cemetery at 1:00pm. The family requests in lieu of flowers, donations can be made to Harvest Chapel of Venice or Shining Light Ministries at the address or link below: Harvest Chapel of Venice P.O. Box 555 Venice, Florida 34284-0555 www.harvestchapelofvenice.org Shining Light Ministries P.O. Box 50231 Sarasota, Florida 34232

On August 8, 2021, Glenn Slabaugh, devoted husband and father of three, left this world at the age of 87 surrounded by his family to be with God. Glenn was born in July of 1934 in Holmes County, Ohio to Monroe and Helen Slabaugh and raised... View Obituary & Service Information

The family of Glenn Slabaugh created this Life Tributes page to make it easy to share your memories.

Send flowers to the Slabaugh family.