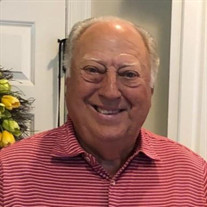 Glenn Charles Wood passed away surrounded by his family on December 24, 2020, at the age of 75 in Sarasota, Florida. Born February 11, 1945, to Charles and Opal Wood in St. Louis, MO, Glenn built on his humble beginnings to become a highly educated man with a commitment to his country, his family, and his faith. He touched so many lives in so many ways. He is survived by Sally, his loving wife of 52 years, as well as his brother Paul, his sisters Joyce and Donna, and his devoted children: daughter Diane and her husband Glen, son Mike and his wife Katie, and daughter Katie and her husband Chris. He was blessed with nine grandchildren: Alexander, Kaylie, Samantha, Taylor, Sean, Mckenzie, Ashlyn, Benjamin, and Evelyn. Glenn graduated from the University of Missouri (Rolla, MO) with a Bachelor of Science Degree in Mechanical Engineering as well as a Master of Science in Engineering Administration. After graduation, Glenn proudly served his country in the US armed forces as a Lieutenant in the US Army where he was a highly decorated veteran of the Vietnam War. Following his commitment to his country, Glenn had a successful career as a mechanical engineer at several public and private engineering companies, and ultimately retired from L-3 Communications in 2011. He dedicated his life to his family and the community in which he lived. As a resident of Sarasota, FL, for over 42 years, Glenn was a pillar of the Trinity United Methodist Church, serving on numerous committees and loved cooking for the congregation’s weekly dinners. He was an advocate and leader for raising scholarship funds for the Trinity United Methodist youth as well as aspiring engineering students through the Society of Manufacturing Engineers. His volunteering efforts and contributions to the Sarasota Sailor Circus and the volunteer Sailor Circus Band (saxophone) were immeasurable. Glenn’s love of sport (an avid golfer and fisherman) and the arts (circus, theatre, music, and movies) have been instilled in his children and his grandchildren. They aspire to build upon the foundation he established, and they will strive to carry on his legacy. A visitation for the public will be from 4-6 p.m. Wednesday, December 30, 2020 in the Toale Brothers Funeral Home (6903 S Tamiami Trail, Sarasota, FL 34231). There will be a graveside service at Sarasota National Cemetery (9810 State Road 72, Sarasota, FL 34241), at 10:30 AM on Thursday, December 31, 2020. The family requests that gifts or contributions in honor of Glenn be made to the Glenn and Sally Wood Scholarship Fund at Trinity United Methodist Church (4150 South Shade Avenue Sarasota, FL 34231). “The world needs more people like Glenn Wood”, said everyone who ever met him.

Glenn Charles Wood passed away surrounded by his family on December 24, 2020, at the age of 75 in Sarasota, Florida. Born February 11, 1945, to Charles and Opal Wood in St. Louis, MO, Glenn built on his humble beginnings to become a highly... View Obituary & Service Information

The family of Glenn Charles Wood created this Life Tributes page to make it easy to share your memories.

Glenn Charles Wood passed away surrounded by his family on December...

Send flowers to the Wood family.