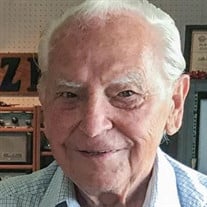 Hans always had a love for technology which began as a young boy when he took apart radios to figure out how they worked. He was born and raised in Germany and turned his passion into his profession by studying Electrical Engineering and getting his first job as an optics specialist at Zeiss. In 1958, Zeiss offered him the opportunity to go to New York to work for a year, and he ended up staying in the United States permanently. His expertise in optics, magnetic film, and motion cameras led to a job with Fairchild Industrial Products, where he first worked on endless loop sound projectors. He was then tasked with developing a cockpit voice recorder (CVR) and flight data recorder (FDR), commonly known together as a “Black Box”. Information gathered by the Black Box is used to reconstruct what happened when problems arise during an airline flight. Hans helped investigate many airplane accidents and spent the next 30 years constantly upgrading the Black Box from its initial days as an endless loop recorder to the current solid-state design. His company relocated the flight recorder division (and the Napfel family) from New York to Sarasota in 1981. When he retired in 1994, Hans turned his attention to his technology hobbies. He enjoyed being a ham radio amateur and was licensed as WB2ZZB. He had many radio friends around the world with whom he had scheduled meet-ups via both voice and morse code. Hans became involved in many local clubs and organizations including the Sarasota and Tamiami Amateur Radio Assns, the Sarasota Technology Users Group, the Quarter Century Wireless Assn and several others. Not only was he a member, but he frequently served as Program Chair, creating and giving presentations on everything from inventions to famous scientists and his own personal travel stories. He enjoyed monthly meetings with 10 different organizations and the friendships he developed with various members throughout his 40 years in Sarasota. Hans also loved helping people, whether solving computer problems or assisting friends and neighbors with repairs in their homes and gardens. Hans made hundreds of house calls showing people how to set up their computers, use email, and surf the web. He was fortunate to have enjoyed over 25 years of retirement, punctuated with lots of tennis games, ski trips and cruises/trips throughout the world. Known as “Opa” to his grandchildren and their friends, Hans will be forever remembered for his fun-loving nature and generosity. He leaves behind his loving wife of nearly 59 years, Lisa (Perk) Napfel of Sarasota, daughter Claudia (Napfel) Murray of Scarborough, Maine, grandchildren Trevor Murray, Kristen Murray and Eric Murray, all of Boston, MA, as well as his sister Emmi (Napfel) Asang and her family from Germany. He is predeceased by his sisters Minnie Lumnitzer of Canada and Friedl Wagner of Germany. Funeral services will be at St. Thomas More Church in Sarasota on Friday, November 13th at 11AM. In lieu of flowers, donations can be made in his honor to the Tamiami Amateur Radio Club, P.O.Box 976, Nokomis, FL 34274.

Hans always had a love for technology which began as a young boy when he took apart radios to figure out how they worked. He was born and raised in Germany and turned his passion into his profession by studying Electrical Engineering and getting... View Obituary & Service Information

The family of Hans F. Napfel created this Life Tributes page to make it easy to share your memories.

Hans always had a love for technology which began as a young...

Send flowers to the Napfel family.