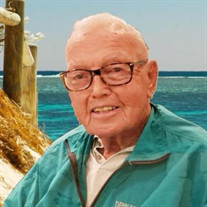 Harold Ragnar Graden, age 93 of Longboat Key, Fl and formerly of Ocean City, NJ, passed away after a brief illness on March 22, 2021 at his Florida home. He was born in Worcester, Massachusetts October 5, 1927. He was a longtime resident of Havertown, PA and preceded in death by his loving wife of 51 years, Ruth Mildred Selman. Mr. Graden was a veteran serving in the U.S. Army after World War II ended in 1945. He graduated from Clark University, Worcester, Massachusetts in 1950 with a Chemical Degree and later received his MBA from the Wharton School of Finance and Commerce in Philadelphia in 1952 with a degree in Business Administration. After selling industrial chemicals for another company, he later founded Graden Chemical Company, a reseller of specialty chemicals which gave him the opportunity to travel extensively calling throughout the United States on business. Harold was an avid golfer and loved sailing, skiing, traveling and the ocean. He was an integral part of The Leif Ericson Society and further a longstanding Member of LEVS, Leif Ericson Viking Ship, Inc., whose mission is to honor the contributions Leif Ericson made in his discovery of North America. Surviving are his two daughters Marlyse Lindblad (Bengt) of West Chester, PA and Christine Graden (Mike) of Florence, MT five grandchildren, Jessica Munley (Matt), Scarlett Lindblad, Rachel Cuff (Tom), John Slavinski (Celine), Stefan Freeth and nine great-grandchildren. A celebration of Harold’s life will occur on a later date to be determined. In lieu of Flowers, donations made in his name can be directed and mailed to Leif Ericsson Viking Ship, Inc. (LEVS), PO Box 779, West Chester, PA 19381-0779 or Gloria Dei (Old Swedes) Church, 916 S. Swanson Street, Philadelphia, PA 19147 (online at www.old-swedes.org.) All donations should be with the notation “In Memory of Harold Graden’.

Harold Ragnar Graden, age 93 of Longboat Key, Fl and formerly of Ocean City, NJ, passed away after a brief illness on March 22, 2021 at his Florida home. He was born in Worcester, Massachusetts October 5, 1927. He was a longtime resident of... View Obituary & Service Information

The family of Harold Ragnar Graden created this Life Tributes page to make it easy to share your memories.

Send flowers to the Graden family.