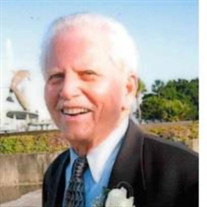 Harris Williams, Sr., 88 of Sarasota, Florida, passed away peacefully on Christmas Day, 12/25/2021. He passed away surrounded by his loving family from natural causes. Harris was born in Bamberg, South Carolina on July 29th, 1933, during the depression and was one of 8 siblings. He entered the Air Force in 1952 after high school graduation and spent four years of active duty and four years in the inactive reserves before being honorably discharged in 1960. His aspirations of a glamorous job started in the newspaper industry loading hundreds of heavy paper bundles at the end of a conveyor belt in the mail room. It was heavy and hard work, but he stuck with it. He also spent much of his free time in the newsroom and sports department, where his true aspirations were. His tenacity and hard work opened the door to a successful career in the newspaper industry starting as a sports reported for the Saint Petersburg Times, where he developed friendships with the likes of MLBs Stan Musial and Eddie Stanky. While in St. Pete he married his first wife Madeleine Rodden and had two sons, Harris and Scott. In the early 1960s he moved to the Sarasota area, where he worked for the Lindsey family as Managing Editor of the Sarasota Herald Tribune, often going to the Monterey Peninsula and Appachicola as part of his job. The Sarasota Herald Tribune later sold to the New York Times, where he continued to work until his retirement in the 1980s. He enjoyed life fully and made important health changes in his mid-50s, when he also met the love of his life and unwavering companion Marie Castelli. They married and spent days together enjoying their family, traveling in their RV with their dog Max riding shotgun, playing golf, and participating actively in their grandson's life and sports. Being restricted to mobility devices in the later years of his life never stopped him from enjoying the Sarasota Downtown, where he lived, fishing and being active in family gatherings. He also spent a majority of his time working on the computer and learning new programs "to keep my brain from turning to mush," he insisted, which it never did. He was a great conversationalist and always had clever remarks to make, sharp sports commentary and a good sense of humor. Harris is survived by his wife, Marie Castelli Williams, his son Harris B. Williams, Jr., and grandson Harris B.. Williams, III, son Scott D. Williams, wife Maria and granddaughter Ashley, and by his stepdaughters Sue Miller-Breit, her husband Ed Breit and Karen Miller and her partner Linda Mollihan. Harris is also survived by his siblings Curtis (Cooter) Williams and Georgia Ann Williams. A service will be at the National Veteran Cemetery on March 15th at 10am. The family requests donations be made to the Humane Society of Sarasota or Tidewell Hospice of Sarasota.

Harris Williams, Sr., 88 of Sarasota, Florida, passed away peacefully on Christmas Day, 12/25/2021. He passed away surrounded by his loving family from natural causes. Harris was born in Bamberg, South Carolina on July 29th, 1933, during the... View Obituary & Service Information

The family of Harris Williams, Sr. created this Life Tributes page to make it easy to share your memories.