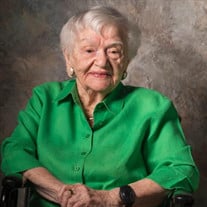 Click link to view Dr. Helen N. Fagin’s service: https://www.dropbox.com/s/nwbtnuoe5nid4ga/Dr. Helen Fagin Funeral Service.mp4?dl=0 Dr. Helen N. Fagin, a Holocaust survivor who gained international prominence as an educator and moral authority, died March 13, 2022 at Aviva Senior Living in Sarasota, Florida. She was 104. She is survived by her children, Judith and Gary (Nancy); granddaughter, Cora; sister, Teresa; six nieces; three nephews; descendants in the U.S., England and Israel of relatives who survived the Holocaust; and myriads of admiring colleagues and students. Born in Radomsko, Poland, Helen Fagin (née Neimark) grew up in a home imbued with Jewish tradition and culture. She was in her second year at the Jagiellonian University in Krakow, Poland, when World War II began. Soon after, her parents were sent to the Treblinka concentration camp, where they perished. She and her two sisters survived, spending five years in ghettos and in hiding, separated then reunited. She arrived in New York City in 1946, speaking little English. In 1948 she married Sidney Fagin. In 1951, with daughter, Judith, Helen and Sidney moved to Miami, Florida, where son, Gary, was born. In 1971, she joined the University of Miami’s English department faculty, having completed both her bachelor’s and master’s degrees there. She rapidly established herself as a dedicated teacher and community member, winning both the Freshman Teacher of the Year and the Panhellenic Council Best Professor awards. She was a favorite amongst students. In a letter to the editor of the student newspaper, The Miami Hurricane, a group of students wrote: “Mrs. Fagin cares about us as people, not as numbers or just as faces. She is teaching us the concept of morality towards other human beings; showing us the wrongs of man’s inhumanity to man and how we can correct the embedded philosophy. She teaches us by showing us.” Her open houses, held regularly in her home, were immensely popular. At a time when tensions over race, religion and the Vietnam War were high, students had a place to come together and talk. For over 20 years she had rarely, if ever, spoken of her own experiences, the memories too painful to share. That changed, however, when Night author and future Nobel Laureate Elie Wiesel was invited to speak at the University of Miami Hillel House. She was asked to hold a reception in his honor at her home. It was there that he encouraged her to talk about her experiences so that others would not “describe it from their imaginations.” She began inserting Holocaust literature into her classes, eventually developing a curriculum for a Literature of the Holocaust class––one of the earliest of its kind in the nation. She concentrated on teaching a moral lesson: “I became strongly convinced that the Holocaust could serve as a constructive lesson in teaching personal morality to young men and women,” she said. The fact that she herself was a survivor made the lessons all the more poignant. The course became part of the newly created Judaic Studies program at the University of Miami. She became its director in 1978, after receiving her Ph.D. in 1977. In 1979, Dr. Fagin became the education adviser to Wiesel in developing the United States Holocaust Memorial Museum in Washington, DC, and later served as chair of its Education Committee. She was also instrumental in the creation of the Holocaust Memorial Miami Beach and the Florida Holocaust Museum in St. Petersburg, FL, and served, at the request of President Bill Clinton, on the committee that created the World War II Memorial on the Mall in Washington, DC. After arriving in Sarasota in 1993, she continued promoting Holocaust education. In her honor, the Fagin Holocaust Scholarship was established for students at New College of Florida. The Dr. Helen N. Fagin Holocaust, Genocide and Human Rights Collection at New College’s Jane Bancroft-Cook Library continues to expand and be a resource for students, faculty, and the community. In 2011, she was the featured speaker at New College’s Commencement exercises. Out of an experience filled with hatred and cruelty, Helen Fagin implemented lessons of compassion and understanding, of tolerance and inclusivity. Her daughter, Judith, has honored her legacy by setting up the Dr. Helen N. Fagin Holocaust Education Endowment Fund at the United States Holocaust Memorial Museum. In lieu of flowers, donations in honor of Dr. Fagin can be directed to the United States Holocaust Memorial Museum or to her collection at New College, as follows: Sara Eigenberg, Office of Planned Giving, Fagin Fund United States Holocaust Memorial Museum 100 Raoul Wallenberg Place, SW Washington, D.C. 20024-2126 Checks should be made payable to U.S. Holocaust Memorial Museum with a notation on the check “Fagin Holocaust Education Endowment Fund.” For more information: Sara Eigenberg, 202-834-8644, [email protected] Dr. Helen N. Fagin Holocaust, Genocide and Human Rights Collection New College of Florida Foundation 5800 Bay Shore Road Sarasota, FL 3424 For more information: MaryAnne Young, 941-487-4800, [email protected] Funeral Services will be held at Toale Brothers Colonial Chapel, 40 N. Orange Avenue, Sarasota on Tuesday, March 15, 2022 at 1:00 pm. Interment will follow at Temple Beth Sholom Cemetery.

The family of Dr. Helen N. Fagin created this Life Tributes page to make it easy to share your memories.

Send flowers to the Fagin family.