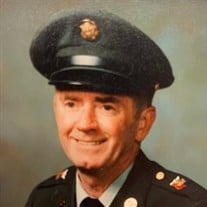 Herbert Daniel “Red” Suitto, 94, died peacefully at home on May 16th surrounded by his family. Herbert was born in Albany NY to Daniel & Carrie (Moss) Suitto. He lived most of his life in Schodack, NY & Nokomis, FL. He was predeceased by his brother Jack Suitto & sister in-law Kathleen; his son Thomas; his daughter Alicia and his granddaughter Sierra, brothers-in-law, Edward Garrigan and William “Sandy” Culihan. He is survived by his wife, the love of his life and best friend for 72 years Gloria (Culihan) Suitto, by his children, Paul Suitto, Maryrose Kadell & (David), Robert Suitto, Joseph Suitto & (Sharon), David Suitto, Carolyn Suitto, Mark Suitto & (Tina), Peter Suitto, Maureen Suitto & (Bob Cunningham), Glory Mink & (William), Bernadette Guerrier & (Ludd). Also, by his in-law's Joan Garrigan, Theresa Culihan & Linda Culihan. Herbert leaves behind his 19 cherished grandchildren, 16 great-grandchildren & 1 great-great-grandchild, as well as Nieces & Nephews. Herbert was a proud Retired Army Veteran. He Served in the WWII Pacific Theatre (Okinawa, Japan). He went on to serve in Seoul during the Korean War as a Peacekeeper. He then later served as a National Guardsman for the State of New York for 39 years of active service and he attained the rank of Master Sgt. E.8. He retired from the US Postal Service of Delmar NY. He received a Service Award for an honorable career of 37 years to the Government of The United States in 1983. In his early years he played semi-pro basketball and softball with the National Guard. Herbert was an avid bowler starting off with a job setting Pins in the 1940's then continuing to bowl in a league through the late 1980's obtaining many awards. His life revolved around his family. He was a devoted husband and father of 13 Children. He enjoyed watching all sports on tv and especially Yankee Baseball games. At all times he could recite the entire roster of the Yankees. He had a great love of History, visiting Battlefields and Military Bases. Herbert will be honored during a memorial Service on Thursday May 27, 2021, at 4:00 PM with military honors at Toale Brothers Funeral Home, Ewing Chapel, 140 E. Venice Avenue, Venice, FL 34285.

Herbert Daniel &#8220;Red&#8221; Suitto, 94, died peacefully at home on May 16th surrounded by his family. Herbert was born in Albany NY to Daniel & Carrie (Moss) Suitto. He lived most of his life in Schodack, NY & Nokomis, FL. He was predeceased... View Obituary & Service Information

The family of Herbert Daniel Suitto created this Life Tributes page to make it easy to share your memories.

Herbert Daniel “Red” Suitto, 94, died peacefully at home on May...

Send flowers to the Suitto family.