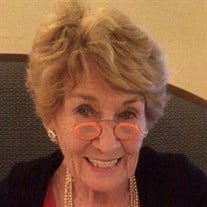 We are deeply saddened to share the passing of Imogene Mary Wottowa, née Bilyeu, on November 18, 2020, at age 90. Imogene was born December 23, 1929 in Russellville, Kentucky, the third of eight children, to Edgar Vernon Bilyeu and Euva Mae Bilyeu, née Henderson. The family moved to Pontiac, Michigan when Jeanne was four years old, and settled in White Lake when she was eleven. Jeanne graduated from Ortonville high school in 1947, and was crowned Miss Ortonville. On October 28, 1952, Jeanne married the love of her life, William James Wottowa, at The Blessed Sacrament Cathedral in Detroit, and settled into a home on Green Lake. Soon Jeanne and Bill were busy raising 5 children. In 1968, they built their dream home on Cass Lake in Orchard Lake. When not chasing kids around, Jeanne was an avid sailor, downhill skier, tennis player, and yogi. She and Bill traveled the world to ski with a close group of friends. Every weekend in the winter, Jeanne would mobilize the troops to drive up north to Gaylord to ski at Otsego, or race at another ski area. She and Bill were huge supporters of ski racing, from high school ski swaps to U.S. Ski Team auctions. Jeanne also developed a passion for photography, transforming her laundry room into a darkroom. Once the kids were grown and Bill retired, he and Jeanne set up a trifecta of their favorite spots: Torch Lake in Northern Michigan, Telluride, Colorado, and Grand Cayman. Jeanne flourished in all these wonderful places, and enjoyed sharing time there with family and friends. More recently, they split their time between Torch Lake and Sarasota, Florida. Jeanne always had a twinkle in her eye, a bit of mischief hiding behind her beautiful smile. Known for being silly and a serious prankster, Jeanne was game for just about anything fun. She never lost her down home roots, and was comfortable in a gown at a formal soirée, or in hiking boots on the trail. Jeanne was incredibly gracious, and had a way of making people feel comfortable, with a homemade cookie, an infectious smile, or a warm hug. She loved keeping up with the many pursuits of her children, grandchildren, and great grandchildren, and was active on Facebook way before everyone else. Her obsession with Apple products earned her the nickname Cyber Jeanne. Cars were also a passion of Jeanne’s, the faster and sportier the better. Hopefully she’s cruising around in the Bentley of her dreams! Most of all, she loved her family, and has been a tireless cheerleader, coach, counselor, and sometimes referee for all. Loving wife of William James Wottowa. Loving mother of Susan Stevens, Sally (Viktor) Brandtneris, Will Wottowa, Peter Wottowa, Amy (Michael) Melone. Proud grandmother of Tracey (Mike) Stein, Jay (Cassie) Van Tuyl, Viktor (Sarah) Brandtneris, Alexander Brandtneris, Clay Larson, Savannah Larson, Allison Hastings Wottowa. Proud great grandmother of Gracen, Jack, Jada, Coral, and L.J.. Beloved sister of Wandy (Jim) Lowe, sister in law of Carol Wozniak. Beloved aunt of many nieces and nephews. Beloved mother in law to Jeffrey Larson and Robin Stanley. Beloved mother to her poodle Henri. Interment will be at Oakland Hills Memorial Gardens in Novi, Michigan.

We are deeply saddened to share the passing of Imogene Mary Wottowa, née Bilyeu, on November 18, 2020, at age 90. Imogene was born December 23, 1929 in Russellville, Kentucky, the third of eight children, to Edgar Vernon Bilyeu and Euva Mae... View Obituary & Service Information

The family of Imogene Mary Wottowa, nee Bilyeu created this Life Tributes page to make it easy to share your memories.

We are deeply saddened to share the passing of Imogene Mary Wottowa,...