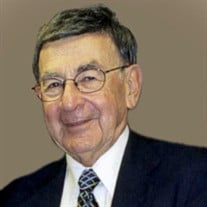 Dr. Irving Bennett passed away on September 7 in the company of his loved ones. He was an amazing man, husband and father. Born on June 11, 1923 in Port Henry, New York, he grew up in Mineville in upper state New York, the youngest of four children. His family was poor but his father taught him the importance of philanthropy, something he continued to practice his entire life and of which he was most proud. Dr. Bennett received his doctorate of optometry degree from Pennsylvania College of Optometry (now Salus University) in 1944 and then served as an optometrist in the Army Air Forces Medical Corps, ultimately moving to Beaver Falls, Pennsylvania to open his optometric practice in 1946 and continuing for 45 years. He became involved in local politics early on, running for and winning a seat on the Beaver Falls School Board in 1948. He served on the board for 17 years, mostly as president. During that time he recruited the first African American teacher. In the mid 1950’s, as president of the Beaver Falls Recreation Commission, he oversaw the Commission’s purchase of the previously privately owned and “whites only” Morado Pool and forced its integration. He was president of United Jewish Community for several years, overseeing the fundraising for and construction of the Jewish Community Center. He was the first to import Varilux progressive lenses to the United States and, at one point, more of his patients wore Varilux lenses than in the entire rest of the country. Dr. Bennett was heavily involved in optometric society leadership. He served on many committees and received state and national awards too numerous to list but including the American Optometric Association (AOA) National Optometrist of the Year (1972), AOA National Distinguished Award (1997), Review of Optometry’s Optometrist of the Decade for Practice Management (2000) and was inducted into the National Optometric Hall of Fame (2004). He was an avid writer and lecturer on business management of optometric practices and was editor of optometric magazines including the AOA Journal and Optometric Management. As the founder and president of Advisory Enterprises, he was publisher of Optometric Management and Ophthalmology Management, among others. He was the founder of Optifair, the first national ophthalmic trade show and precursor to Vision Expo. He served as a consultant to the optical industry serving both national and international clients. In order to promote business acumen in optometric students, he contributed to and aided in the formation of the Bennett Career Services Center at Salus University. As the first optometrist in his family, he started an optometric dynasty. His brother, Milton, who was the one who pushed him into the field, followed suit shortly thereafter. Next was his son, Donald, who went on to become an ophthalmologist in Louisville, Kentucky, and practiced ophthalmology the way Dr. Bennett felt it should be practiced, doing only secondary and tertiary care and no primary care. His daughter, Linda, was next, beginning practice in Belmont, Massachusetts. This was the impetus for a series of articles in Optometric Management that Dr. Bennett penned on practice management titled, “Dear Linda.” The most recent legacy into the optometric field is Linda’s daughter, Rebecca, who joined her mother in practice in 2008. Dr. Bennett spent many winters and, ultimately his retirement, in Sarasota where he remained active attending the arts and served on many organized optometric and local committees. A resident of Pelican Cove for many years, he developed a Cultural Concerts Series, designed and moderated many courses at the Pelican Cove University and wrote a 100+ page History of Pelican Cove book. Later, at The Glenridge, he served on more committees and wrote the “Be Well” newsletter with health advice which he continued doing until just recently. He met Trude while attending college and the two were married while he served in the army. The couple celebrated 75 years of marriage in July. Dr. Bennett is survived by Trude, his two children, Linda Bennett, O.D., and Donald Bennett, O.D., M.D., four grandchildren, Courtnee Bennett, Rebecca Bennett Maida, O.D., Joslyn Overby and Beth Huey, five great grandchildren and his most special friend, Ginette Hersh. Funeral services will take place at Sarasota National Cemetery on September 8 at 12:30 PM, and can be seen on Zoom following the instructions below. Donations in his honor can be made to the United Jewish Federation of Sarasota-Manatee.

Dr. Irving Bennett passed away on September 7 in the company of his loved ones. He was an amazing man, husband and father. Born on June 11, 1923 in Port Henry, New York, he grew up in Mineville in upper state New York, the youngest of four children.... View Obituary & Service Information

The family of Dr. Irving Bennett created this Life Tributes page to make it easy to share your memories.

Dr. Irving Bennett passed away on September 7 in the company...

Send flowers to the Bennett family.