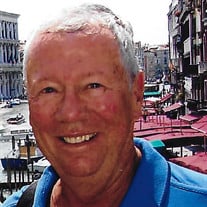 James Madison Boyd, loving husband and father of two children, passed away on Friday, June 17, 2022 at the age of 81. James (Jim) was born on September 18, 1940 in Bessemer, Alabama to James Dawson "JD" and Catherine (Phifer) Boyd. He enjoyed working in the family business, Boyd Machining Company with his uncles Carl and Claude, where he learned many skills, such as precision machining and business management. Jim was a gifted athlete, and especially excelled at baseball, earning an athletic scholarship to play at Auburn University. Jim was a talented and highly recognized southpaw pitcher and Team Captain, playing under the tutelage of famed coach Erskine "Erk" Russell. Jim was also a member of Alpha Tau Omega fraternity. Jim received his Industrial Management degree from Auburn University in 1962. He entered into the U.S. Airforce and began training at Joint Base San Antonio-Lackland, Texas. While visiting Austin, Texas on break, he met Mr. Warren O Martin and his beautiful daughter, Elizabeth “Betty” Martin, a graduate student at the University of Texas. The two immediately hit it off. After Jim completed his Air Force Training, he and Betty married on December 28, 1963, in Chicago, Illinois. While Jim was stationed at Mather Air Force Base in Sacramento, California, their son, Lawrence Martin Boyd was born. Jim later was stationed at Ton Son Nhut airbase near Saigon, where he managed the flight support machine shop. Jim received the Bronze Star for meritorious service. After completing his military service, Jim and Betty moved to Chicago, Illinois and Jim partnered with his father-in-law, Warren, in the leadership and management of Circle Tool Inc. On June 13, 1968, Betty gave birth to their second child, Karen Elizabeth. The family lived in the Chicago area and enjoyed spending time with the extended family. While in Chicago, Jim was active in the Tool & Die Institute, serving as President in 1981. Jim and Betty later lived in Myrtle Beach, South Carolina, St. Louis, Missouri, and Cincinnati, Ohio, where Jim led various manufacturing sites for Lear Siegler and Sperry Rubber & Plastic. In 1998, Jim and Betty retired to Lakewood Ranch, Florida and were among the earliest residents and were charter members of Lakewood Ranch Golf and Country Club. In line with his lifelong passion for sports, Jim closely followed his Auburn Tigers, staying involved in the "A" Club, and connecting with his baseball teammates. Jim, was a life-long tennis player and enjoyed the competition and fellowship of league tennis. Jim and Betty were seasoned travelers, and visited every continent (except Antarctica). Favorite trips included Egypt, Australia, Bangkok and many Caribbean cruises and European river tours. Jim was preceded in death by his father, James Dawson, and his mother, Catherine. He is survived by his wife Elizabeth, his two children, Lawrence Martin (Eleanor) Boyd of Columbia, South Carolina and Karen Elizabeth (Michael) Anderson of Palm Harbor, Florida and grandchildren Christian Julian Dreher Boyd, Elliott Phifer Greer Boyd, Luke James Anderson and Joshua Arthur Anderson. Funeral services will be held on Friday, June 24, at 12:00 PM at Toale Brothers Funeral Home, 40 N Orange Ave, Sarasota, FL 34236. Visitation with family will be one hour before the service. There will be a private burial service at a later date at Sarasota National Cemetery. In lieu of flowers, donations may be sent to the Alzheimer’s Association.

James Madison Boyd, loving husband and father of two children, passed away on Friday, June 17, 2022 at the age of 81. James (Jim) was born on September 18, 1940 in Bessemer, Alabama to James Dawson "JD" and Catherine (Phifer) Boyd. He enjoyed... View Obituary & Service Information

The family of James Madison Boyd created this Life Tributes page to make it easy to share your memories.

Send flowers to the Boyd family.