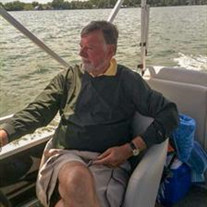 James “Jim” Edward Gibson, 80, died on July 2, 2021, at his residence in Sarasota, Florida. He was born on July 3, 1940, in Huntington, WV, the son of Edward W. Gibson and Eloise (Sadler) Gibson. Jim attended Marshall University in Huntington, WVA and completed service as a Member of the Army National Reserve. While attending Marshall, Jim met and married his wife of 59 years, Verna Kaye LeMasters. He was a proud supporter of Marshall University Athletics and the Big Green. Jim was a Lifetime Member of the Marshall University Alumni Association (MUAA) and served on the boards of the MUAA, the Society of Yeager Scholars, The Marshall University Foundation, Inc., and Vice Chair of the Campaign for National Prominence. He was honored with the MUAA Distinguished Service Award and inducted into the Marshall University Pathway of Prominence with his wife, Verna. Jim was a proud member of the Sigma Phi Epsilon Fraternity; Past Board Member of the Girls and Boys Club of Sarasota, Fla and Huntington, WVA; supporter of Hospice Huntington; Member of the Episcopal Church. Jim was also a Member of Community Lodge #684 in Columbus, Ohio for 44 years. Jim’s early career was in sales management and then as an investor in small businesses. Surviving in addition to his wife, Verna (LeMasters) Gibson, are his daughters, Kelly Gibson Winbigler and Beth (Dewey) Allen, both of Columbus, Oh. Grandchildren: Krista (Jeff) Steele, Jessica Winbigler, Josh Winbigler and Jenna Allen. Greatgrandchildren: Lucy Elizabeth Steele and James Marshall Steele; one brother, Bill Gibson and his wife Sally Gibson of Roswell, GA, as well as several nieces and nephews. Jim’s life passions were family, friends, and all things Marshall. A celebration of Life will be announced at a later date. Those who wish to remember Jim in a special way may make gifts in his memory to the scholarship fund of James E. Gibson. Please send donations to The Marshall University Foundation, 519 John Marshall Dr. Huntington, WV 25703. Please note James E. Gibson Scholarship on the memo line.

The family of James "Jim" Edward Gibson created this Life Tributes page to make it easy to share your memories.

Send flowers to the Gibson family.