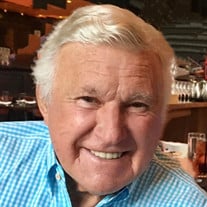 Jim Matson, 81, of Longboat Key, FL, passed away February 9, 2022 from complications due to Parkinson’s disease. His wife, Jane, was by his side. Jim was born in Mankato, MN to Herbert and Gladys Matson. He married Jane (Hall) Matson of Mankato in 1964. Jim received his Bachelor of Science degree from Minnesota State University (Mankato State College) in 1963. He served as an officer in the Air Force from 1964-1970, attaining the rank of Captain and was a decorated Viet Nam veteran. He earned his Masters of Business degree at the University of Chicago and had a long career with major companies in the pharmaceutical and cosmetic industry. He retired from Procter and Gamble Corporation as a divisional senior vice president, operations. Following his retirement, Jim enjoyed traveling the world with his wife, Jane, mentoring his adored daughter in her career, watching his grandson play football through his college years and treasured time with their family in Bachelor Gulch, CO. He also devoted his talent and time to many charitable organizations in Baltimore, MD and Sarasota, FL. His volunteerism included Catholic Charities, Service Corps of Retired Executives (SCORE), AmeriCorps; and Citizens Democracy Corps, traveling to Romania and Russia following the fall of the Berlin Wall in 1989, to advise start-up businesses. He was a Guardian Ad Litem for children in Sarasota, FL and a small business mediator in the Sarasota County courts. Jim was an avid tennis player and a member of the Longboat Key Club. He is survived by his beloved wife, Jane, daughter Tracey Matson Amadio, a grandson, Michael James Amadio; and brothers-in-law Michael (Sandy) Hall and Patrick Hall. In Jim’s memory, please consider donations to the Parkinson’s Foundation, Children’s First, Girl’s Inc. – Sarasota or Tidewell Foundation.

Jim Matson, 81, of Longboat Key, FL, passed away February 9, 2022 from complications due to Parkinson&#8217;s disease. His wife, Jane, was by his side. Jim was born in Mankato, MN to Herbert and Gladys Matson. He married Jane (Hall) Matson... View Obituary & Service Information

The family of James H. Matson created this Life Tributes page to make it easy to share your memories.

Send flowers to the Matson family.