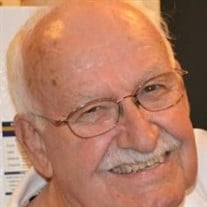 James Lewis Peachey, 88, passed away peacefully on February 14, 2022 under the care of the Tidewell Sarasota Hospice House. He was born February 20, 1933 in Ontario Canada and moved to northern Indiana in 1952, where he married and started his family. In 1967, he moved his family to Sarasota, where he worked in the demolition and land development industry. Later he established his own Automotive/Equipment repair business in Sarasota, and eventually chose to retire to Hillsboro, West Virginia with his beloved wife of 35 years, Nancy Peachey. He loved boating/sailing, hunting and fishing, remodeling and developing properties, hosting cookouts for family and friends and listening to/singing gospel music. In 2021, he moved back to Nokomis, Florida from his mountain in WV, to be closer to his children and enjoy the warmer weather. He is predeceased by his parents, Stephen and Ruth (Schrag) Peachey, a brother and his beloved wife, Nancy. Jim leaves behind his children, Randy Peachey (Carrie) of Port Charlotte, Cindra Vaden (John) of Hixson, TN, Julie Trimpe of Nokomis, Ross Peachey (Elena) of Nokomis, Don Peachey (Heidi) of Sarasota, their mother, Virginia and stepdaughters, April Hess (Edward) of Venice and Susie Pointer (Bart) of Fort Worth, TX, twelve grandchildren, sixteen great grandchildren, a sister, three brothers and numerous beloved Peachey family members and Ruth Lewis of Lewisburg, WV. His positive and happy personality along with his strong determination and adventurous spirit will be dearly missed by family and friends. The family will be hosting a celebration of Life on Sunday, February 20th starting at 1 pm at the North Jetty Park at Nokomis Beach. In lieu of flowers, donations may be made in his memory to Tidewell Hospice at 5955 Rand Blvd., Sarasota, FL 34238, www.tidewell.org. Our thanks to Toale Brothers Funeral Home & Crematory for handling the final arrangements.

James Lewis Peachey, 88, passed away peacefully on February 14, 2022 under the care of the Tidewell Sarasota Hospice House. He was born February 20, 1933 in Ontario Canada and moved to northern Indiana in 1952, where he married and started... View Obituary & Service Information

The family of James Lewis Peachey created this Life Tributes page to make it easy to share your memories.

Send flowers to the Peachey family.