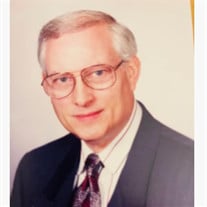 Jay David Berman passed away suddenly and unexpectedly on October 10, 2021 at his home in Bradenton, FL He was 83. Born in Danville, VA to Beatrice and Isaac Berman, Jay was a resident of Danville for most of his adult life. He graduated from George Washington High School in Danville and Davis and Elkins College in West Virginia. Jay owned J. Berman’s Clothiers, a fine menswear store that was a mainstay of downtown Danville for over 100 years. The store was founded in 1894 by his grandfather, Jacob Berman, and continued through the lifetimes of his father, Isaac, and his uncle Louis Berman. Jay ran the store after their deaths until his retirement in 2006. Jay was a civic leader in Danville who was president of Beth Sholom Temple, a 32nd degree Mason, active in the Shriners (past president) and Lions Clubs, member of Men's Apparel Club, the Danville Rescue Squad, and numerous other civic organizations. For many years Jay wrote a highly regarded column, Off the Cuff, on men’s fashion that appeared in the Danville Register. Jay served with honor in the U. S. Army. Jay was a member of Temple Beth Israel in Longboat Key, FL. Jay was a loving father to his sons, Marc Isaac Berman of Bradenton, FL, Barry Michael Berman of Norfolk, VA, and a daughter, Stacey Snyder (Rick) of Smithfield, VA. He was a devoted brother to Ronald Berman (Sybil Marcus) of Berkeley, CA and Ellen Berman (Roy Cohen) of Bethesda, MD and Sarasota, FL. He was formerly married to Sandra Berman Fraim. He leaves his cherished long-time partner, Lydia Bohn of Sarasota, FL, as well as many cousins. A graveside service will be held at 11 am on Sunday, October 24, 2021 at Aetz Chayim Cemetery, 196 Westover Drive, in Danville. Funeral arrangements by Townes Funeral Home in Danville, VA. In lieu of flowers, donations in Jay’s memory may be made to the Shriners Hospitals for Children or to the charity of your choice.

Jay David Berman passed away suddenly and unexpectedly on October 10, 2021 at his home in Bradenton, FL He was 83. Born in Danville, VA to Beatrice and Isaac Berman, Jay was a resident of Danville for most of his adult life. He graduated from... View Obituary & Service Information

The family of Jay David Berman created this Life Tributes page to make it easy to share your memories.

Jay David Berman passed away suddenly and unexpectedly on October...

Send flowers to the Berman family.