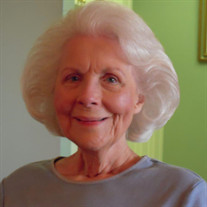 Jean Tarleton Hayo Carter, a long-time Sarasota resident, passed away of natural causes on April 2, 2020, at the age of 99. She was predeceased by her first husband of 41 years, Herschel C. Hayo, Sr.; her second husband of 17 years, William E. Carter; and son, Herschel C. Hayo, Jr. She is survived by her sons and their wives: Michael T. and Jane Hayo; Stephen C. and Carey Hayo; Jonathan W. and Tammy Hayo; daughter-in-law, Barbara M. Hayo; and stepson and his wife, William D. and Barbara Carter. She is also survived by her grandchildren: Leslie Hayo, Kimberly Hopper, Kelly Ellis, Jennifer Hayo, Michelle Nelson, Lisa Houston, Paul Hayo, Taylor Pfender and Sarah Hayo. Jean welcomed 16 wonderful great-grandchildren and 3 great-great- grandchildren into her life over the years. Jean was born on January 4, 1921, to Harry E. Tarleton and Adele Elswick Tarleton in Columbus, Ohio. She attended Ohio State University in Columbus, Ohio, where she studied home economics and met and married Herschel C. Hayo, Sr. of Cincinnati, Ohio in 1941. In 1946, the family of three moved to Sarasota, where Herschel, Sr. was a businessman and also served as the Mayor of the City of Sarasota. The family grew into a household of four boys, whose friends always found a warm welcome in the Hayo home. Jean was perhaps best known and loved in her role as mother, homemaker and mentor, taking pride in cooking, sewing, flower-arranging and mothering her large family. Over the years she served as the chair of several annual flower shows for the Sarasota Garden Club, was active in her Chi Omega sorority and was a member of the Unity of Sarasota church. Later in life, with her second husband Bill, Jean enjoyed a life of traveling, dining with friends, playing bridge and dancing to Big Swing Band music. To all who knew her, Jean was beautiful, inside and out. Her legendary beauty turned heads, but it was her kindness and grace that captivated all. Jean’s love for her four boys had no bounds. In her heart each was uniquely special. Her gift of making everyone feel special was not limited to her boys. She embraced all of her extended family with equal favor. Jean...Mom…Nana. She was beloved by all.

Jean Tarleton Hayo Carter, a long-time Sarasota resident, passed away of natural causes on April 2, 2020, at the age of 99. She was predeceased by her first husband of 41 years, Herschel C. Hayo, Sr.; her second husband of 17 years, William... View Obituary & Service Information

The family of Jean Tarleton Hayo Carter created this Life Tributes page to make it easy to share your memories.

Send flowers to the Carter family.