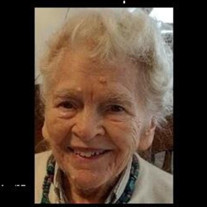 Jeanne Marie Biringer, 97, passed away peacefully on March 6, 2021, at Brookdale Deer Creek Care Center in Sarasota. She was born in Elizabeth, NJ, on April 14, 1923. She was preceded in death by her parents George and Frances Cron and her brother Robert as well as Roger, her beloved husband of 68 years. She is survived by her son Roger and wife Isabella and their daughters Victoria and Alexandra, all from Sarasota; as well as her daughter Diane Kleiner and husband Tim, their sons Gabriel and Joshua, his wife Erin and their two sons Judson and Leland, all from California. Jeanne lived and attended school in Roselle Park, NJ, and graduated from Berkeley Secretarial School in East Orange, NJ, after which she worked for Laurence Aeronautical in Linden, NJ, during WWII. She married her high school sweetheart Roger in May 1946 after he completed his service in the US Navy. They lived with their two children in Plainfield, NJ for many years in a home built by Roger and his brothers. Besides being a loving wife and mother, Jeanne volunteered at the NY Botanical Gardens. In 1977 Jeanne and Roger moved to Sarasota, where Jeanne volunteered at Selby Botanical Gardens and Roger was Administrator and Treasurer. They also organized and presided over many social events there. They travelled to many countries across the world, which brought them a lot of joy. Jeanne said that Jerusalem was the most meaningful trip for her since “you walked where Christ walked”. Jeanne was a loving, devoted, and serviceful wife, mother, grandmother and great-grandmother. Until we meet again, dear Soul… The funeral service will take place at Sarasota National Cemetery, 9810 State Rd 72, Sarasota, FL 4241 at 9:30 AM, Wednesday, March 17

Jeanne Marie Biringer, 97, passed away peacefully on March 6, 2021, at Brookdale Deer Creek Care Center in Sarasota. She was born in Elizabeth, NJ, on April 14, 1923. She was preceded in death by her parents George and Frances Cron and her... View Obituary & Service Information

The family of Jeanne Marie Biringer created this Life Tributes page to make it easy to share your memories.

Send flowers to the Biringer family.