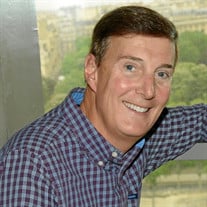 It is with the utmost sadness that the family of Jed Ida announces his passing on June 14, 2020 at the age of 61. He left this world peacefully and surrounded by those he loved most. Jed was born on January 17, 1959 to the late Anne O’Connor Ida and John Ida in Albany, NY. He attended Vincentian Institute in Albany and graduated with honors from Shenendehowa High School in Clifton Park, NY in 1977. He was a double alumnus of Tufts University where he graduated with a BS in Mechanical Engineering in 1981 and as a DMD in 1985. Jed and his lifelong partner, Margaret moved to Saratoga Springs, NY shortly after his graduation and built a beautiful life with their daughters there. He practiced dentistry in Clifton Park for many years before becoming the proud owner of his own dental practice in Lake George, NY. He served as a general and cosmetic dentist for 30 years before retiring to Sarasota, FL in 2015. He found great fulfillment in providing his patients with the best dental care while forming lasting relationships with them. Jed brought his zest for living into everything he did. He lived a life of incredible fun and enjoyed every moment. He was a lifelong Los Angeles sports fan and was a southern California guy at heart. He loved watching and attending both college and professional sports and could be counted on to always be the most animated fan. He was an avid golfer and played for many years in leagues in Saratoga Springs, NY and Sarasota, FL. He loved to ski, bike ride, exercise at the gym, and spend time with his family and friends. He was a fan of the arts and enjoyed all different kinds of music. On Thursday nights in the summer, he could often be found watching fireworks from his boat on Lake George. Being in or near the water brought him great happiness. He served as the President of the Fourth District Dental Society of NY, became a Fellow of the Academy of General Dentistry (FAGD) as well as was a member of the American College of Dentistry. He volunteered for many years as a Lake George Rotarian and was a member of the Ancient Order of Hibernians and the Elks Club. He lit up every space he entered and made everyone around him feel special and seen. He met every obstacle he faced with grace, a positive outlook, and tremendous courage. We miss his smile, laughter, endless jokes and everything about him. We loved him fiercely and he will forever live on in us. Jed was predeceased by his beloved mother Anne whose values shaped the kind and generous person that he was. He was also predeceased by his daughter Jasmine, Godmother Dottie Smith, and many other special relatives. Left to carry on his legacy is his wife of 38 years, Margaret of Sarasota, and their daughters Stefanie and Julia of Tampa; grandson Oliver; father John of Clifton Park; brother Robert (Mary Ann) of NH and many cherished extended family members and friends. Celebrations of life for Jed will be held at later dates in both Sarasota and NY. In lieu of flowers, his family asks that donations be made in his name to charities that Jed held dear to his heart: Feeding America (feedingamerica.org), or the Humane Society of Tampa Bay (humanesocietytampa.org). Remembrances can be left at www.toalebrothers.com.

It is with the utmost sadness that the family of Jed Ida announces his passing on June 14, 2020 at the age of 61. He left this world peacefully and surrounded by those he loved most. Jed was born on January 17, 1959 to the late Anne O&#8217;Connor... View Obituary & Service Information

The family of Jed Ida created this Life Tributes page to make it easy to share your memories.

It is with the utmost sadness that the family of Jed Ida announces...

Send flowers to the Ida family.