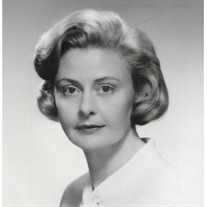 Joan Hock Geier of Sarasota, Florida and formerly of Williamsville, NY, died on October 26, 2020. She was born in Cincinnati, Ohio and graduated from the University of Cincinnati, where she was President of Delta Delta Delta sorority. She taught school in Cincinnati for eight years before moving to New York City as an educational consultant in the public relations department of J.C. Penney, as Editor of Fashion and Fabrics and other educational publications for teachers. A Buffalo resident after her marriage in 1962 to Theodore C. Geier, she immediately became an active volunteer as Vice President of Finance for the Visiting Nursing Association. As a board member of Buffalo City Panhellenic, she originated and chaired the first sold out Kinder Konzert with the Buffalo Philharmonic Orchestra. She became active in the Women’s Committee of the BPO, holding many offices, ending as President from 1972-74. She originated the “Thomas is Terrific” concert series subscription campaign, which received national recognition at the Women’s Association for Symphony Orchestras, WASO. Later, she co-chaired the WASO’s Biennial Conference, held in Buffalo in 1975. “Woman of the Year” was awarded to her by the Buffalo Philharmonic Orchestra Society in 1984 for her many volunteer activities. As a member of the Sales and Rental Gallery of the Albright Knox Art Gallery, she was Treasurer from 1983-85. She chaired and escorted three yearly international art tours to Europe and Southeast Asia to benefit the AKAG. She was elected a director of the Buffalo Fine Arts Academy from 1985-88. In 1998, she and her husband moved to Sarasota, FL, where she enjoyed golf, her book club, bridge and traveling. She was a member of the investment club at the Garret Club in Buffalo for many years. Survived by her husband of 58 years and a daughter, Mary Beth Donohue (Joseph) and two grandsons, Joseph T. III and Theodore C. (Teddy) of Oyster Bay, NY. A Mass of Christian Burial will be held on Saturday, October 31 at 11am at The Church of Saint Patrick, Bee Ridge Road, Sarasota. In lieu of flowers, donations may be made to Tidewell Hospice.

Joan Hock Geier of Sarasota, Florida and formerly of Williamsville, NY, died on October 26, 2020. She was born in Cincinnati, Ohio and graduated from the University of Cincinnati, where she was President of Delta Delta Delta sorority. She... View Obituary & Service Information

The family of Joan Hock Geier created this Life Tributes page to make it easy to share your memories.

Joan Hock Geier of Sarasota, Florida and formerly of Williamsville,...

Send flowers to the Geier family.