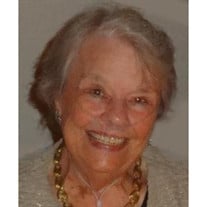 Joanna Brown passed away peacefully on the morning of June 13 following a long but undeterred life with emphysema. Joanna was born in Port Arthur, TX to Russell Brown, an executive with Standard Oil, and Jonnie Dycus Brown. Her dad's position took the family to the Persian Gulf for her childhood years where he oversaw the development of drilling operations on the island of Bahrain. Joanna and her younger brother Russell "Rusty" Brown (Dorris) of El Paso, TX attended Kodaikanal International School in India. They had many an adventure as they traveled independently to and from Bahrain via steam ship, train and bus to visit their parents and to return to the states to spend time with Texas and Michigan family, including their sister Virginia. Those travels in the 1940's led Joanna to a passion for adventure and travel. After attending Southern Methodist University she applied to the stewardess program at American Airlines, where she not only flew for several years, but also became "the face" of American, appearing in advertisements and on billboards. Joanna married Dr. Murf Klauber in 1953 while he was finishing orthodontics school in Philadelphia. They moved to Murf's hometown of Buffalo, NY where they welcomed their children Michael Klauber (Terri), Katie Klauber Moulton (Michael) and Tommy Klauber (Jaymie). Joanna loved her life as a Mom and homemaker, but was also always active in the performing arts, including playing piano with the Buffalo Symphony and singing soprano for the Buffalo Schola Cantorum. In 1967 Joanna was suffering from one of her many bouts of respiratory distress and came to Longboat Key to stay with friends while recovering. After just one day she phoned Murf and convinced him to take a detour to Sarasota on his route to give an orthodontics lecture in St. Louis. They were completely taken with this paradise, knew Sarasota was where they wanted to raise their children and quickly moved their family from Buffalo. Joanna's love of theater and the arts was piqued in her new hometown, and she instantly became a regular on stage at The Golden Apple, Player's Theater, Asolo, Venice Little Theater and others. After her divorce from Murf and her children were in college, the call of new adventures and brighter lights led her to move to New York City where she lived for nearly 20 years. Joanna loved Shakespeare and discovered the New York Shakespeare Theater where she honed her skills under the tutelage of Eric Hoffman, who says of his student, "She threw herself into the work in ways so many could take a lesson from. She wasn't interested in being rich or famous – she just wanted to wrap her lips around those magnificent words and ideas and recite them every day." Joanna also regularly performed with The Shaw Project and volunteered for the Jewish Guild for the Blind where she recorded "books on tape" and radio. While in NYC she committed herself to helping others in alcohol recovery, and along with a small global group founded an online resource for 24/7 meetings, and created a "Daily Message" that reached as many as 20,000 subscribers around the world, which she remained committed to writing until just before her passing. Joanna's health forced her to return to Sarasota in 2007 to be closer to her children. While she could no longer work on stage, she continued to attend performances throughout the community, often with one of her beloved grandchildren or children by her side. Joanna is survived by her brother and family, and also what she lovingly called "her pride and joy;" her three children; grandchildren Kelly, Jessica, Kristopher, Molly, Max and Mikayla; several "step-grands" in her very modern family; and her great-grands Elijah and Samuel Smith and new twins Maya and Ellie Biter. She was so elated to be able to hold both twins days before her passing. Joanna was an indomitable spirit, fiercely independent, a voracious and curious scholar, fascinating conversationalist, authority in world history, accomplished pianist, quick witted, and intensely loved by her family. For all who knew Joanna, she touched deeply and left behind indelible memories in each and every one. Her children, grandchildren and great-grandchildren are eternally grateful for the lifetime of lessons, and endless love she shared with them. As she is welcomed into the arms of her loved ones, special friends - and many beloved pets who passed before her, we know the stage lights in heaven will shine a little brighter for her next big act. Memorial Donations may be made to the Humane Society of Sarasota County.

Joanna Brown passed away peacefully on the morning of June 13 following a long but undeterred life with emphysema. Joanna was born in Port Arthur, TX to Russell Brown, an executive with Standard Oil, and Jonnie Dycus Brown. Her dad's position... View Obituary & Service Information

The family of Joanna Brown created this Life Tributes page to make it easy to share your memories.

Joanna Brown passed away peacefully on the morning of June 13...