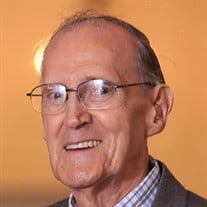 John Thomas (Tom) Allen passed away peacefully at home on April 10, 2021. He was born on August 14, 1926 in Zanesville, Ohio to the late Arnold A. Allen and Georgia A. Derwacter. Tom is survived by his loving wife of 70 years, Velma Irene Harden. Tom was a World War II Army Veteran having served in the 94th Infantry Division. After returning from the war, he graduated from Bliss College and managed a large trucking company in Zanesville. He owned a picture framing business after relocating to Sarasota, Florida in the late 70’s. He retired from the postal service as a rural letter carrier in 1998. Tom enjoyed playing golf, reading, and watching sports with Velma. He was Past Master of the Lodge of Amity #5, a York Rite Mason, a Knight Templar, and a Shriner. He was also a life member of VFW Post 3233 and the DAV. He enjoyed the 94th reunions and especially the reunion in Washington, DC with a visit to the World War II Memorial. Tom was a member of First Presbyterian Church of Sarasota. Tom was a devoted family man and is also survived by his four daughters, Pamela (Mark) Trout, Rebecca Allen, Deborah (Gary) Williams, Constance Willoughby, and two sons, John, and Charles; six grandchildren, David (April) Trout, Angie (Sam) Gianettino, Keri (David) Higginbotham, Courtney (Nick) Crouch, Larz Willoughby, and Jordan Allen; and three great-grandchildren, Kasey Trout, Elijah and Alexis Higginbotham. He is also survived by many nieces and nephews who loved him dearly. He was preceded in death by his seven siblings. Visitation will be from 6-8 pm with a Masonic Service on Monday, April 19, at Toale Brothers Funeral Home, 40 N Orange Avenue. Interment with military honors will be at Sarasota National Cemetery, 1:00, Tuesday, April 20, 2021. In lieu of flowers, donations may be made to Shriners Hospital or St. Jude’s Hospital.

John Thomas (Tom) Allen passed away peacefully at home on April 10, 2021. He was born on August 14, 1926 in Zanesville, Ohio to the late Arnold A. Allen and Georgia A. Derwacter. Tom is survived by his loving wife of 70 years, Velma Irene... View Obituary & Service Information

The family of John Thomas (Tom) Allen created this Life Tributes page to make it easy to share your memories.

Send flowers to the Allen family.