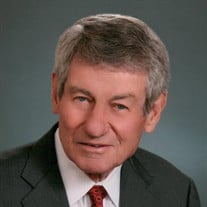 John M. Blume, died peacefully on September 20, 2020 at Tidewell Hospice House in Sarasota, Florida, with his wife, Myrna, by his side. He was 88 years old and had been battling chordoma since 2014. John was born in Plainfield, New Jersey and subsequently lived in New York City, Morris County, NJ and finally Longboat Key, Florida. He graduated from Washington & Lee University and Rutgers Law School. He was admitted to the NJ Bar in 1956 and joined his father, Charles Blume, in practice. Over the course of his 60 year career John built a celebrated plaintiff personal injury practice, now called Blume Forte Fried Zerres & Molinari. John was known among the trial bar as a master in the courtroom, a constant source of new and bold ideas. He was willing to push boundaries to create new law in his field. He gave freely of his time, experience and expertise by mentoring and teaching trial skills to new lawyers. He was a Master in the Inns of Court, one of the first attorneys to become a Certified Civil Trial Attorney, and a charter member and President of the American Board of Trial Advocates, as well as a member of the American Board of Trial Lawyers. John received awards from the Essex County Bar Association, Trial Attorneys of New Jersey, and was honored with the James J. McLaughlin Award in 2000. The National Law Journal described him as a “Jersey Giant.” John loved his retirement on Longboat Key. In addition to tennis and golf, which he enjoyed with great enthusiasm, he supported the Sarasota Orchestra and the Van Wezel Performing Arts Center and served on the Board of the Perlman Music Program/Suncoast. While John’s professional life was filled with accolades and awards, his approachability, modesty and lack of pretension extended to his personal life. Friends, relatives, and members of the community knew him to be generous in spirit and practice. He was renowned for his dedication and loyalty. His dry wit was embraced and celebrated. John is survived by his wife of 44 years, Myrna Blume, his children, Randy Blume and Lawrence Blume, and his grandson, Elliot Kephart. He was predeceased by his sister, Lois Binder. For those wishing to donate in his memory, the family suggests the Chordoma Foundation, P.O. Box 2127, Durham, NC 27702 or www.chordomafoundation.org.

John M. Blume, died peacefully on September 20, 2020 at Tidewell Hospice House in Sarasota, Florida, with his wife, Myrna, by his side. He was 88 years old and had been battling chordoma since 2014. John was born in Plainfield, New Jersey... View Obituary & Service Information

The family of John M Blume created this Life Tributes page to make it easy to share your memories.

Send flowers to the Blume family.