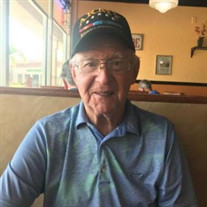 John R. Bowman passed peacefully in his sleep at his home in Bradenton. Born in Houghton Lake, Michigan to George H. and Aletha M. Bowman, he was the fourth of eight children. Sister Marion (Chuck) Van Sickle and brothers Fred (Carol) Bowman and George R. (Lola) Bowman preceded him in death. He is survived by sisters Rhea (Joe) Bruno of Bethesda, MD. Joann (Cliff) Flanigan of Sarasota, FL. Maryellen (Steve) Hoag of Old Lyme, Conn. Brother Jack (Donna) Bowman of Holt, MI. John was an avid sportsmen and athlete. He enjoyed fishing and hunting in his youth. A photo from 1948 shows him with two trophies, a deer and a black bear! He played basketball, baseball, football and ran track in high school. Golf, fishing and watching basketball and the Detroit Tigers were his favorite pastimes. He enlisted in the Army and was sent to Korea in 1950 with the 7th Infantry Division, 32nd Regiment. News clippings quote Major General Ferenbaugh commending the unit for “superior performance of duty, valorous combat and steadfastness of mission.” His favorite stories of his time in service included his reunion with fellow Houghton Lake soldier Joe Kerry. They enlisted and trained together but were sent overseas at different times. When John arrived the day after Christmas and reported for duty, there was Joe! His driving skills made him a favorite with his Captain. After the Captains Jeep stalled in water and Corporal Bowman’s passed with ease, the Captain yelled “Bowman, you’re my new driver!” After his service he married Joyce Medore Hicks and became the father of her daughters Christine (Ralph) Williams and Debbie (Bruce) Smarjesse. Five more children followed: Connie (Glen) Bowman Daigle of Buford, GA. Terry (Bernie) Filipski of Piney Creek, NC. Jeff (Cielo) Bowman of Bradenton, FL. John (Lenore) Bowman of Monroe, NC. Andrea (Brad) Clyne of Bradenton, FL. 14 Grandchildren and 12 Great grandchildren. He worked as an inspector for the Roscommon Co. Road Commission until 1969 when he moved to Southern California. There he continued as an inspector for geological firms on the west coast and in Hawaii. In 1996 he married Bonnie Lou Barnes and retired, moving back to Houghton Lake to care for his father. He loved being in his hometown, playing golf with brother Ed, ice fishing and searching for the best milkshake in Michigan. He spent most of his winters in Bradenton and moved there in 2018, where he ate all the cookies and drank all the chocolate milkshakes. Visitation will be held on Wednesday, October 7, 2020 from 2 PM - 3 PM with a Funeral Service at 3:00 PM at Toale Brothers Funeral Homes, Colonial Chapel - 40 North Orange Avenue, Sarasota, Florida 34236. Burial will at Houghton Lake Cemetery, in Houghton Lake, Michigan.

The family of John R. Bowman created this Life Tributes page to make it easy to share your memories.

John R. Bowman passed peacefully in his sleep at his home in...

Send flowers to the Bowman family.