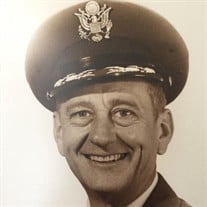 John J. Forst, P.E. born December 27, 1922 in New York City, NY passed away peacefully July 17, 2021 in his home in Sarasota, FL. His wife of over 70 years Jean K. Forst and sons John K., and James K. were by his side. He is survived by his wife Jean, his sons John (Christine) and Jamie, and many loving nieces and nephews and their families. John is the son of the late John Forst of New York City, NY and West Palm Beach, FL and Anna Forst also of New York City, NY and West Palm Beach, FL. He graduated from Palm Beach High School in 1940. After graduating Palm Beach High, he joined the US Army Air Force and served in the Fifteenth Air Force through the end of World War II. His active-duty service included flying 33 heavy bombing missions on a B-24 Liberator Bomber in the European Theater of Operations, Rome-ARNO, Balkans, Southern France, and Southern Germany. He earned several decorations and citations including a Purple Heart Award. After his active-duty service, he served in the United States Air Force Reserves until his retirement as a Lieutenant Colonel in 1971. He earned Bachelor’s and Master’s Degrees in mechanical engineering from the New Jersey Institute of Technology. He was inducted into the Pi Tau Sigma Engineering Honor Society. He was a member of the American Society of Mechanical Engineers and the National Society of Professional Engineers. After returning from WWII, he worked for Bell Laboratories in Murray Hill, NJ in materials and mechanics research and development including some of the technologies ultimately resulting in the development of the transistor. While at Bell Labs, he met Jean Kelly, who became his wife of over 70 years. He then returned to government service working for the US Department of Defense. During the energy crisis in the early 1970’s he became responsible for strategically vital energy and related satellite-based defense technologies and was one of the early leaders of the US Department of Energy. His final post at the Department of Energy was with the Office of International Security Affairs in Washington, DC where he was the head of engineering for numerous satellite sensor and related energy defense programs. He managed programs at Sandia National Laboratories, Los Alamos, NM, Lawrence Livermore National Laboratory, Livermore, CA, Argonne National Laboratories, IL, and numerous others. Upon retirement in 1986, he moved from the family home in Great Falls, VA to Sarasota, FL and enjoyed an active, long, and full retirement. He and Jean enjoyed traveling, visiting friends and family, and many outdoor activities. Funeral services will be held at the Sarasota National Veterans Cemetery on July 29, 2021 at 11 AM. Full military honors will be presented. The family will receive friends from 6-8 PM on July 28, 2021 at the Toale Brothers Funeral Home – Gulf Gate Chapel 6903 S Tamiami Trail, Sarasota, FL 34231, ph. 941-955-4171. In lieu of flowers, kindly consider donating to the Tidewell Hospice Foundation 5955 Rand Blvd., Sarasota, FL 34238, or by visiting https://tidewellfoundation.org/donate/.