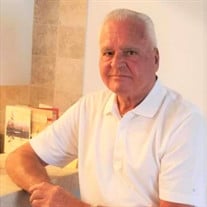 John Douglas Kennedy (Doug) passed peacefully on Wednesday May 11, 2022, at his home in Sarasota, Florida at the age of 78. Doug was born on October 7, 1943, in Detroit, Michigan to Helen M. Kennedy. He grew up in Lapeer, MI and was a proud graduate of the Lapeer High School Class of 1961. He married his high school sweetheart and the love of his life, Barbara Burrough, 61 years ago at Grace Episcopal Church in Lapeer. Doug leaves behind: Barb, daughter Marjorie Kennedy, son John (Monica) Kennedy, grandchildren: Christopher, Amanda, Collin and Ella, a brand-new Great Granddaughter Savannah, sister Donna, niece Dawn, Sisters-in-law Pat, Janet, Luanne, and families. He was preceded in death by his mother Helen in 2002. Doug was interested in everything and everyone he met. He never missed his morning newspaper including having the Lapeer County Press delivered to his home in Florida. His enterprising spirit led him to start businesses including a car dealership, pizzeria and doughnut shop in Michigan and swimming pool businesses in FL. Elite and Superior Pools both have been named by Pool & Spa News as Top 50 Pool Builders in the country. Since 1984 he owned and operated Elite Pools in Sarasota with his son John who will continue Doug’s legacy. Doug always enjoyed RVing, boating, golfing with friends, and NASCAR. He and Barb boated around the U.S. from the St. Lawrence Seaway, around the Great Lakes and down the Mississippi to the Gulf of Mexico. Every summer you could find them in the cleanest motorhome at Lapeer’s Water Tower RV Park. There they caught up with everyone, and he especially loved spending time with his “brother” in-law Ernie until his death in 2015. All held him in highest regard and loved him dearly, especially his dry wit and deadpan delivery. A celebration of his life will be on Sunday, May 22nd from 2-5 pm at the Blue Surf American Grill off SR-70 and I-75, 5820 Ranch Lake Blvd. in Bradenton. In lieu of flowers, donations can be made to St. Jude’s Children’s Hospital.

John Douglas Kennedy (Doug) passed peacefully on Wednesday May 11, 2022, at his home in Sarasota, Florida at the age of 78. Doug was born on October 7, 1943, in Detroit, Michigan to Helen M. Kennedy. He grew up in Lapeer, MI and was a proud... View Obituary & Service Information

The family of John 'Doug' Kennedy created this Life Tributes page to make it easy to share your memories.

Send flowers to the Kennedy family.