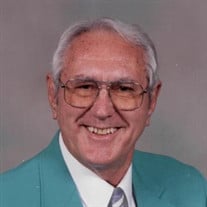 Dr. John V. Koczman, age 91, of Sarasota, Florida, entered into his heavenly home on August 3, 2020. He was born on May 1, 1929, to William and Mary Fasang Koczman, of Milan, Michigan, joining two older brothers, Rudy and George. In 1947, the two-time state champion in Shot Put, became the nation’s number one high school shot putter and later was inducted into the Michigan High School Hall of Fame. He earned both his Bachelor (1953) and Master (1957) Degrees from Eastern Michigan University. He earned his Education Specialist Degree (1965) in administration from Michigan State University, and finally his Doctor of Education from Wayne State University in Administration and Curriculum in 1982. On November 10, 1951, he was united in marriage to Barbara Anne Stokes. Their marriage was blessed with four children: John Raymond, Scott Douglas, Bruce Victor, and Sandra Marie. He was not only a community leader, but a devoted and loving husband and father. He was active throughout his life in his Christian faith and served in a number of capacities as a servant leader in the congregations they attended. Dr. Koczman served as a high school teacher and coach in Walled Lake, as a school administrator in Dearborn, Dearborn Heights, Durand, and Shepherd, Michigan. After retiring as an administrator and school superintendent in his home state of Michigan, he became the Superintendent of Macon County Public Schools in Tuskegee, Alabama, and later the Head Master of Macon Academy, and finally taught elective classes at Auburn University. He moved to Sarasota, Florida in 1996 and remained active in church and with retired educators’ and administrators’ groups. He was preceded in death by his parents William and Mary, his brothers George (Nov), and Rudy (Dec) in 1957, his sister-in-law Margret Possley in 2007, one nephew, William in 2016. Preceding him also was his wife of 48 years, Barbara Koczman in July of 1999. He is survived by his sons: Rev. John (Cathy) of Beaverton, OR, Scott (Rachelle) of Houston, TX, Rev. Bruce (Karen) of Middleton, NJ, and daughter Sandra Larson (Scott) of Sarasota. He is also survived by 2 nieces, Lynn McCulloch and Kay Roeser. His legacy includes 14 grandchildren, and 14 great grandchildren. Services for Dr. John V. Koczman will be scheduled at a later date with Beautiful Savior Lutheran Church in Sarasota, Florida.

Dr. John V. Koczman, age 91, of Sarasota, Florida, entered into his heavenly home on August 3, 2020. He was born on May 1, 1929, to William and Mary Fasang Koczman, of Milan, Michigan, joining two older brothers, Rudy and George. In 1947,... View Obituary & Service Information

The family of Dr. John V. Koczman created this Life Tributes page to make it easy to share your memories.

Send flowers to the Koczman family.