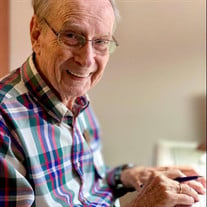 John David Martin was born in Birmingham, Michigan, the son of Clifford Wayne Martin and Florine White Martin. His mother died when he was a toddler; his sisters Yula and Maxine, and his brother Jack and sister-in-law Miriam were instrumental in supporting him during his early years. He was also loved and cared for by his Aunt Gayle Martin Gilliatt and Uncle Elmer Gilliatt. John graduated from Baldwin High School in the last January graduation class, and immediately received a draft notice. John chose to join the Navy and proudly served during the Korean War as a personal writer for Admiral Blick. He was going to re-enlist, but Admiral Blick strongly encouraged him to go to college. First in his family to attend college, he enrolled at Wayne State University under the G.I. Bill and received his B.S in Business Administration. He joined Alpha Kappa Psi fraternity and was lifelong friends with his fraternity brothers. After graduation John worked for the J.L. Hudson Company and the Ford Motor Company in Detroit. John met the love of his life, Mildred (Millie) Runnells, at the bus stop on the corner of Chicago Boulevard and 2nd Street in Detroit on their way to work. That bus ride started a life filled with love and adventure that they shared for the next 64 years. John always said that sitting next to Millie that day forever changed his life. They were married in the Chapel at Michigan State University. They moved to Kalamazoo, Michigan when John accepted a job with the Upjohn Company in the international division. John’s international odyssey began when he was transferred to Mexico City, Mexico for six years, and then to San Juan, Puerto Rico for 18 years. In this capacity, John served as General Manager of Upjohn InterAmerican Corp, Puerto Rico Branch; General Manager of the Upjohn Manufacturing Company in Arecibo, Puerto Rico; and Corporate Vice President for Puerto Rico Manufacturing Operations. John was humbled when he received the Upjohn Award. John left his mark on the community and society of Puerto Rico by serving as president of the Pharmaceuticals Industry Association and sponsoring community support programs to help charitable and academic entities including the “Fundación de Puerto Rico” and the University of Puerto Rico. He was very active and supportive of the Second Union Church in San Juan. John and Millie returned to Kalamazoo when John was named Corporate Vice President for Public Relations. Two years later he retired from Upjohn and moved to sunny Sarasota, Florida. John enjoyed volunteering at the All-Faiths Food Bank. He also enjoyed attending the Church of Palms and singing hymns from his heart. John loved his strolls always stopping to admire the flowers and wildlife. One of John’s greatest joys was travelling with his “lovely bride” as they made their way around the world and treasured every adventure. He also loved spending summers on Torch Lake in Northern Michigan. Loving his boat tours, cottage renovation projects, happy hours, grilling, landscaping, and singing around the campfire making s’mores with the family. Being surrounded by Spartans, John graciously cheered them on and attended numerous games and events wearing the green and white, although his family knew he was deep down a Wolverine fan. Words that describe John are loving, loyal, determined, dedicated, witty, charming, funny, strong, smart, optimistic, hopeful, sweet, generous, positive, fun loving, and passionate. He greeted everyone with a handshake, a smile, and a pun. He and his family are forever grateful for his care at Sarasota Memorial Hospital (especially Dr. Meredith), the Carroll Center at the Glenridge, Tidewell Hospice, Greenleaf Trust and his extended family at Take Care (especially Diane, Luz, Pat, and Terry). John died peacefully surrounded by the best care team. You can bet that he is now dancing to one of his favorite Frank Sinatra songs in heaven with his lovely bride Mildred V Martin (April 11, 1933-November 2, 2021). The two lovebirds are forever united, shining bright. He was the most loving, witty, and loyal husband, father, father-in-law, and grandfather. John’s love shines on in his daughters Suzie Gonzalez (husband Jorge Gonzalez) and Mary Kay Heldman (husband Craig Heldman), and his four beloved, beautiful, and bright grandchildren Kristina, Carlos, John, and Madelyn. His grandchildren will carry on the legacy of John’s work ethic, fairness, integrity, kindness, humor and love of traveling adventures. Services will be private. In lieu of flowers, memorial contributions may be made in his name to Sarasota Memorial Hospital (1515 S. Osprey Ave., Suite B4 Sarasota, FL 34239 - smhf.org), All Faiths Food Bank (8171 Blaikie Court Sarasota, FL 34240 – allfaithfoodbank.org) or the organization of your choice.

John David Martin was born in Birmingham, Michigan, the son of Clifford Wayne Martin and Florine White Martin. His mother died when he was a toddler; his sisters Yula and Maxine, and his brother Jack and sister-in-law Miriam were instrumental... View Obituary & Service Information

The family of John David Martin created this Life Tributes page to make it easy to share your memories.

John David Martin was born in Birmingham, Michigan, the son of...

Send flowers to the Martin family.