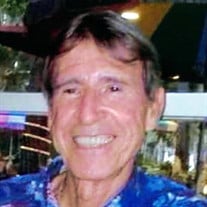 Lt. Col. John “Sean” McGrath, U.S. Army (Ret.) passed away June 28, 2021. Born on October 31,1940 in Belfast, Norther Ireland, to John and Bridget Jordan McGrath, Sean emigrated to the United States for college at Northeastern University, where he joined the ROTC. After graduation he married his college sweetheart Mary. A brief stint at General Electric was followed by a 20-year Army career. Some of Sean’s postings included time in Germany and a tour with the Royal School of Signals at Blandford Camp in Dorset, England, and graduation from the Navy Post Graduate School in Monterrey, California, followed by jump school and a tour in Vietnam. And he attended the Command General Staff College at Fort Leavenworth. But the highlight of Sean’s Army career was an assignment to the White House Communications Agency under President Carter’s administration. On retirement from the Army, Sean was employed in communications with Conrail in Philadelphia, and also graduated from the Executive Education Program at the Darden School, University of Virginia. He continued with an active volunteer life after retirement working for the Sustainable Jobs Fund, the Community Learning Center, Big Brothers of Philadelphia, and the Dalesford Abbey as an usher. After moving to Longboat Key, Sean became involved with Take Stock in Children and was a Guardian Ad Litem. He was also an active Kiwanis member, a member of the Longboat Key Tennis Center, and a member of St. Mary’s Men’s Club, where he also served as a lector. Preceded in death by his brother Brian, Sean is survived by his wife Mary, children Erik McGrath and his wife Sherry, daughters Maura Kieffer and her husband Tim, and Monika McGrath, his much loved grandchildren, and a great grandson. He is also survived by his brothers Patrick and Terrence McGrath. He was also loved by many members of his and Mary’s extended family of nieces, nephews, and cousins, and he will be greatly missed for his wit, wisdom, charm, and service to his family and the greater community. Funeral services will be held at 11:00 a.m. on Saturday, July 24, 2021 at St. Mary Star of the Sea Church, 4280 Gulf of Mexico Drive, on Longboat Key. He will be laid to rest with military honors in the church memorial garden after the service.