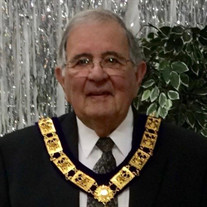 John A. Unger, Sr, 83, better known to his friends as Jack, passed away peacefully on Monday, August 23, 2021 with his children by his bedside. He was born in Paterson, NJ to the late John and Catherine (Cobell) Unger. He graduated from St. Mary’s High School in Paterson and later earned a Bachelor of Science in Criminal Justice from William Paterson College. After marrying Claire Evans, they moved to Wayne, NJ to raise their family. He served honorably in the United States Marine Corps and was a lifelong public servant, having spent over 20 years with the Paterson, NJ Police Department and Passaic County Prosecutors Office. After retirement, they moved to Florida in 1986 and became long term residents of the Sarasota-Bradenton area. He was involved in many social and community organizations and continued his role as a public servant, working as Deputy Director of Probation for the Salvation Army Correctional Services in Venice, FL. He loved to cook and travel and visited many countries around the world. He was a member of the Elks for over 50 years and was one of the original trustees of the Lakewood Ranch - Sarasota Elk Lodge #2855. There he was able to work with many causes and raise money for groups such as Military Veterans and the Harry-Anna Trust Fund, which funds the Florida Elks Children’s Therapy Services and Florida Elks Youth Camp programs. He served as the Lodge Exalted Ruler in 2014. Jack is predeceased by his wife of 44 years, Claire, and his sister Suzanne (Unger) Bandola. He is survived by his partner of 16 years, Joanne DiCarlo of Bradenton; two children, Jack Unger of Palm Beach Gardens and Beth Van Vranken of Bradenton; two grandchildren, John Van Vranken of Fort Mill, SC, Bryan Van Vranken of Sarasota and his 6 nieces and nephews. He was dearly loved and will be missed. A memorial mass and celebration of life to honor Jack will be held at a future date when all can safely gather. Memorial Donations may be made in Jack’s name to: The Harry-Anna Trust Fund c/o LWR Elks 4602 Lena Rd. Lakewood Ranch, FL 34211

John A. Unger, Sr, 83, better known to his friends as Jack, passed away peacefully on Monday, August 23, 2021 with his children by his bedside. He was born in Paterson, NJ to the late John and Catherine (Cobell) Unger. He graduated from St.... View Obituary & Service Information

The family of John A. Unger, Sr. created this Life Tributes page to make it easy to share your memories.

Send flowers to the Unger, family.