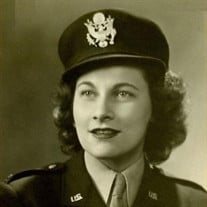 Jordis (Jordy) Holter Dahl passed away peacefully on April 21, 2021 at the age of 99 years and 9 months. She was born Jordis Sylvia Holter July 14, 1921 in Hatton ND, daughter of Fritjof and Jennie Holmen Holter of Norwegian heritage. Jordy graduated from St. Luke’s Nursing School in Fargo ND in 1942 and worked at Mt.Sinai Hospital in Milwaukee, WI and Physicians-Surgeons in Glendale,CA. until she joined the army in 1944. She served her country as an Army Nurse on the USS Hope during WWII in the Pacific Theater. During the height of the Pacific campaign, she earned 1 Silver and 2 Bronze Stars as a 1st Lieutenant. Her story of service is commemorated at the “Military Women’s Memorial” in Arlington VA, and she personally attended the dedication of that memorial. Following the war, she served as a flight attendant for Northwest Airlines and TWA. In 1949 she married the late Darrell Alton Dahl, Sr. and subsequently lived in San Jose CA, Atlanta GA, and ultimately settled in Tampa FL in 1959. She was an active member of Good Shepard Lutheran Church in Tampa, serving on many committees. She and Darrell were members of Palma Ceia Golf and Country Club since 1960 where she enjoyed socializing and golf. Jordy and Darrell were active members in Sword & Shield which played a part in attracting the Buccaneers to Tampa. They were lifelong Buccaneer fans. Along with the Reiner family, they had numerous fundraisers for the Tampa Philharmonic and other charities. Jordy also belonged to the Palma Ceia Women’s Club and the Timquanian Society of Tampa. Jordy and Darrell enjoyed entertaining at their house on the bay and were known for late night sailing with dear friends, partying and singing. They had spontaneous parties at the “Dahl House” and once ended with the entire group in the pool, all still dressed in formal attire. She had a great sense of humor. Her hearing loss from the war offered such great moments as “Mom did you see the movie Castaway” at which she replied, “Who passed away?”. Upon hearing the oh-so-often miscue she typically burst out laughing. The stories are endless. She is survived by her son Darrell (Dell) Dahl, Jr., his wife Tracy, her daughter Deborah Dahl Bell and husband Harry “Sanders” Bell, their sons, her Grandchildren, and families: Harry Sanders Bell IV and wife Lauren, Spencer Hagen Bell and wife Emily, Derik Alton Bell and Dylan Anton Bell. Jordy was graced with five Great Grandchildren: Lillian Charlene, Beatrice Elizabeth, Charlotte Elizabeth, Harrison Salem, Ethan Sanders. She will be missed by many loving nieces and nephews. An open house celebration of Jordy’s life will be held at her former home in Tampa on June 5th from 1-4 p.m. (Masks please for the non-vaccinated). In Hatton ND, a service will be held 11 a.m. at St. John’s Lutheran Church with burial at St. John’s Cemetery on July14th, time to be announced later. In lieu of flowers, donations would be appreciated to either St. Johns church in Hatton, ND, Good Shepard Lutheran in Tampa, FL, or the charity of your choice. Jordy was an icon of service to her family, country, and community. What a Gal!

The family of Jordis Holter Dahl created this Life Tributes page to make it easy to share your memories.

Send flowers to the Dahl family.