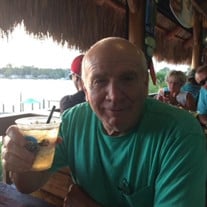 On January 29, 2021, Joseph J. DiPietro, 74, affectionately known as “Boop”, passed away peacefully at his home of natural causes in North Port, FL. Originally from Baltimore, MD, he was the son of Joseph F. & Marie K. DiPietro (both deceased), Beloved brother and survived by P. Joanne Miller, Frederick J. DiPietro, Philip A. DiPietro & his wife, Patricia, and Claire M. Mecler & her husband, Michael, and many nephews and nieces. The very special lady in his life is R. Isabel Sotelo Gonzalez from Bogota, Columbia. They met in Panama while he was vacationing there. Joe continued to visit at least once a year until travel restrictions prevented it. Isabel lives and manages a hotel in El Valle, Panama. Joe proudly served in the U.S. Navy for over 20 years as a Radio Man 1st Class, traveling on various aircraft carriers including the U.S.S. Oriskany, and serving in many countries including Panama, Guam, the Philippines, Korea, Cuba and the state of Hawaii. After retiring from military service, he worked as a Ranger and Mechanical Technician at Susquehanna State Park for the State of Maryland. He was a member of the Veterans of Foreign Wars #8203, AMVETS #FL-0312, F.O. Eagles, and Moose Lodge #764. His many hobbies included gardening, studying Spanish and Italian, and collecting many gadgets, electronics, and widgets as imaginable. Interment will take place at Sarasota National Cemetery, 9810 S.R. 72 in Sarasota on Monday February 22, 2021 at 1PM. In lieu of flowers, the family requests donations be made to the AMVETS National Service Foundation, or the Salvation Army. Please visit www.toalebrothers.com to leave a condolence message.

On January 29, 2021, Joseph J. DiPietro, 74, affectionately known as &#8220;Boop&#8221;, passed away peacefully at his home of natural causes in North Port, FL. Originally from Baltimore, MD, he was the son of Joseph F. & Marie K. DiPietro... View Obituary & Service Information

The family of Joseph J. DiPietro created this Life Tributes page to make it easy to share your memories.

Send flowers to the DiPietro family.