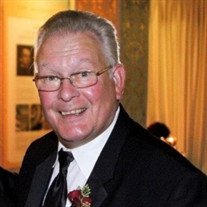 Joseph George (Jay) Leshyn of Sarasota, Florida died peacefully at home on June 19, 2022, at the age of 82 surrounded by his loving wife, Carolyn, and his son and daughter-in-law, Brad and Carrie. Jay was born on March 5, 1940, in Chicago, IL, the son of Joseph and Marie (Hoffmann). He spent his youth in Chicago, graduating from Gage Park High School. From there he went on to become a graduate from the University of Illinois at Urbana-Champaign. Upon graduation from Illinois, Jay served as a lieutenant in the United States Army from 1962 through 1964, stationed primarily at Fort Lewis, Washington. He owned and operated the family flower business for over a decade before embarking on a career in sales. His distinguished sales career lasted until his retirement in 2001 and included several President’s Club awards, which allowed him to travel the world. Upon retirement, Jay and Carolyn built a home in University Park where they enjoyed a long and fruitful retirement, including learning how to play golf! He golfed multiple times a week, and although he was hardly a scratch player he enjoyed every round, especially the 19th hole! They were also dedicated travelers and went all over the globe including a flight over Antarctica! As a University of Illinois alumnus, he was a die-hard fan of Illini sports, having held season football tickets for over twenty years. Despite witnessing more losses than wins, he was as devoted a fan as there was. He traveled with his family and friends to several Illini-related events including two Rose Bowls and basketball games in Maui. He was also a season ticket holder for the Chicago Blackhawks in the 1960s and 70s and was able to witness his beloved White Sox win a World Series in 2005. Upon hearing the news of a White Sox winner on his next to last day of life he broke out into a huge grin. Jay was the most generous, fun-loving and devoted husband, father and friend to all. He loved life and was often the life of the party. He enjoyed Lou Malnati’s pizza and a good glass of Chardonnay! He is survived by his beloved wife of 59 years, Carolyn (Bieritz) of Yorkville, IL, his son Bradley and his daughter-in-law Carrie (Cobern) of Oak Park, IL. There will be a brief memorial service at Sarasota National Cemetery on July 15, 2022, at 11:30am. A Celebration of Life will be announced at a later date. In lieu of flowers, donations may be made in Jay’s name at https://allfaithsfoodbank.org/ Jay touched everyone he came in contact with and will be sorely missed! Please raise a glass of Chardonnay to toast Jay!

Joseph George (Jay) Leshyn of Sarasota, Florida died peacefully at home on June 19, 2022, at the age of 82 surrounded by his loving wife, Carolyn, and his son and daughter-in-law, Brad and Carrie. Jay was born on March 5, 1940, in Chicago,... View Obituary & Service Information

The family of Joseph George (Jay) Leshyn created this Life Tributes page to make it easy to share your memories.