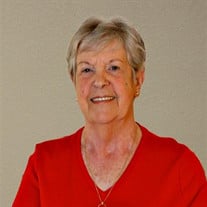 Joyce Harmon of Bradenton, Florida, formerly of Falmouth, Maine died December 11, 2021, after a long battle with cancer. She was born on September 4, 1935, in Kezar Falls, Maine the daughter of Adis M. Stearns and Florence E. Stanley. She grew up in South Hiram, Maine and attended Fryeburg Academy until moving to South Portland the middle of her junior year. She graduated from South Portland High School in 1953. In 1957 she married David W. Harmon at Woodfords Congregational Church. Joyce was a member of the Falmouth Congregational United Church of Christ where she held many volunteer positions. She served as Moderator of the Cumberland Association UCC; President of the State Women’s Fellowship; Maine Conference UCC Board of Directors; member, vice chair and chair of the National UCC Office for Church in Society and the National UCC Nominating Committee. She attended several meetings of the General Synod and was recognized at the Boston Synod as one of 10 Outstanding Lay Persons in the UCC. Joyce joined a group of delegates from General Synod in St. Louis, Missouri who responded to a call from Cesar Chavez to help publicize the plight of grape workers who were being beaten and their homes burned. They traveled to the Coachella Valley, California and went into the vineyards with the farm workers. As a result, the conditions began to be publicized nationally. She continued to support the plight of farmworkers throughout her life. Joyce was appointed by Governor Kenneth Curtis as Chair of the Maine Human Services Council and by Governor Longley as Commissioner and Chair of the Maine Human Rights Commission. She accepted a position with the Catholic Dioceses of Maine as Director of the Center for Accidental Hypothermia and with funding from the national Community Action Agency established programs in twenty-two northern states. She also developed an energy efficiency program in Maine and traveled to the White House to receive an award for her work from President Jimmy Carter. Subsequently, Joyce accepted a position as Coordinator of Geriatric Services at the Maine Department of Mental Health and Mental Retardation. She guided the development of home-based mental health services for older people throughout the state. After several years she became the Health Services Coordinator of the Maine Department of Corrections with responsibility for developing a continuum of health and mental health services at the State prisons and youth facilities. Joyce was elected to the Falmouth Town Council and was the first woman to serve as Chairperson of the Council. Joyce enjoyed travel and visited all 50 states. She loved to read, was a fabulous cook, enjoyed gardening, and spending time with her family. Later she and her husband moved to Florida where they became members of 1st Congregational United Church of Christ in Sarasota. She was an avid quilter and belonged to the Manatee Patchworkers Quilt Guild in Bradenton and the Friendship Knot Quilt Guild in Sarasota. She also kept the Stanley, Stearns, and Harmon genealogies up to date. She is survived by her son Jeffrey and wife Lisa (Deschenes) of Auburn, Maine, daughter Bethany of Southaven, Mississippi, grandson Matthew and wife Ashley (Pepin) of Poland, Maine, granddaughter Katherine and fiancé Max Goldberg Liu of Brooklyn, NY, sister Cheryl and husband David Whitten of Port St. Lucie, Florida, and several nieces and nephews. Joyce was pre-deceased by her husband David, parents, sister Barbara and brothers Hugh and Roger Stearns. Services will be held at the 1st Congregational United Church of Christ in Sarasota on Friday, January 31st at 1:30 PM. The service will be livestreamed via Zoom, please call the Church at 941-953-7044 for the Zoom link and password. In lieu of flowers, donations may be made in her memory to the: National Farmworker Ministry In Memory of Joyce Harmon PO Box 10645 Raleigh, NC 27605-0645

Joyce Harmon of Bradenton, Florida, formerly of Falmouth, Maine died December 11, 2021, after a long battle with cancer. She was born on September 4, 1935, in Kezar Falls, Maine the daughter of Adis M. Stearns and Florence E. Stanley. She... View Obituary & Service Information

The family of Joyce Harmon created this Life Tributes page to make it easy to share your memories.

Send flowers to the Harmon family.