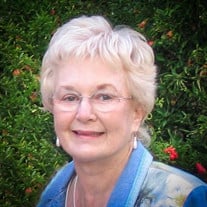 Joyce Keen Novak passed away at the age of 91, on July 5, 2021. She was a resident at Sheridan at Lakewood Ranch, near Sarasota, Florida. She had survived the isolation of the pandemic and struggles of decades of Parkinson’s with the loving, constant support of her husband, Bob. Joyce was born in Ann Arbor, Michigan in November of 1929, the daughter of Clifford Patrick Keen and Mildred Ella (Smith) Keen. She was raised in Ann Arbor, earning a B.S. and M.S. of Education at the University of Michigan. She met her husband Robert “Bob” Novak in 1965, marrying on May 7, 1966. Joyce brought four children to the union from previous marriages, and Bob brought two, blending their families together for the next fifty-five years. Over the years, Joyce and Bob travelled the country and the world, inspiring her life in art. Joyce worked as an artist for over forty years in the Chicago area and in Sarasota, Florida. She is past president of Florida Artist Group, honorary lifetime member of Women Contemporary Artists, and member of the National League of American Pen Women. She has had more than forty solo exhibitions including Chicago, New York, and Sarasota, as well as an invitational exhibition lecture tour at the five leading universities in China during the time of the Tiananmen Square uprising. Many of her paintings are in public and private collections and have received local, regional and national awards. Ms. Novak has worked in many media including oil, watercolor, mixed media and printmaking. Ever-evolving, her later work in digital media was ground-breaking, exhibiting over 100 group exhibitions, including the Selby Gallery, Ringling School of Art and Design, DiFA and the Florida Artists Group, 2000 through 2012. In expressing her artistic vision, Joyce relates: “I believe there is a close connection between the spiritual and the material. There seems to be a pattern connecting humankind with the universe and all of nature that brings significance and meaning to existence. My paintings might appear to contain realism but are fantastical representations and often appear as colorful abstractions.” Joyce is preceded in death by her parents, Clifford Keen and Mildred (Smith) Keen, her sister, Shirley (Keen) Leahy and brother Jim Keen. She is survived by her husband, Robert Novak. She also is survived by son Robert Moore and wife Diane Friedman, son William Moore, and wife Ying Hua, daughter Sue (Novak) Gresham and husband Tom, daughter Marilyn Moore, daughter Nina (Novak) James, and son James Moore and his wife Julie. Joyce and Bob were blessed with eleven grandchildren and seven great-grandchildren. Family was of paramount importance to Joyce, and her many cousins, nieces and nephews were an endless source of joy. Funeral arrangements are under the guidance of Toale Brothers in Sarasota, FL. A memorial will be held in her honor, at a date and time to be announced. Joyce had a special relationship with Parkinson Place, in Sarasota. Because of the inestimable support they have given Joyce and many others, the family suggests that any donations in her name be made to: Parkinson Place. 5969 Cattleridge Blvd., Suite #100 Sarasota, FL 34232(941) 893-4389

Joyce Keen Novak passed away at the age of 91, on July 5, 2021. She was a resident at Sheridan at Lakewood Ranch, near Sarasota, Florida. She had survived the isolation of the pandemic and struggles of decades of Parkinson&#8217;s with the loving,... View Obituary & Service Information

The family of Joyce Keen Novak created this Life Tributes page to make it easy to share your memories.

Send flowers to the Novak family.