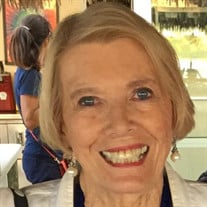 Judith Frances McCurry, 83, passed away peacefully on May 24, 2021 after a short illness. She was born to Lawrence Eugene (Gene) Snider and Ruby Earl (Cofer) Snider, and raised in Lawton, Oklahoma. After graduating from Lawton High School in 1955, she met and married Raymond Edwin Okeson Jr. (Ed), a soldier stationed in Ft. Sill Oklahoma. They were sent to Galenhousen, Germany, serving in the Third Armored Division of the Army, and returned to the USA in the fall of 1958. Returning to Ed’s hometown of Hebron, Illinois with their newborn son, Stanley Gene, they spent 8 years there and had 3 more children, Sharon Elizabeth, Bradley Steven and Laura Anne. In 1967, they moved to Venice, Florida. They divorced in 1970. In 1988, Judith married Regis S. McCurry. They enjoyed visiting the west, especially Montana where they bought a home and spent the next 21 summers. They had a joyful life together and recently celebrated their 33rd anniversary. She was amazingly creative, beautiful inside and out and a ray of sunshine wherever she went. Her favorite place was in her beautiful garden. Judith is survived by her husband, Regis McCurry, sons Stan Okeson (Diana) and Bradley Okeson (Sherrie), daughters Shar De Joy and Laura Spencer (Eric), her Stepson Kevin McCurry (Mary) and Stepdaughter Valery Rachal (John) and by her sister Nancy Baxendale. She is also survived by 3 grandchildren, 3 step-grandchildren and 4 step-greatgrandchildren. She was predeceased by her sister Barbara Tarpley (Bloyce), brother David Snider (Donnola), and son-in-law Bruce De Joy. A Memorial Service will be held June 5th at 3:30pm at Toale Brothers Chapel at 40 N. Orange Avenue, Sarasota, FL 34236. In lieu of flowers, donations may be made to Southern Pines Healthy Pet Clinic, PO Box 2021, Hattiesburg, MS 39403

Judith Frances McCurry, 83, passed away peacefully on May 24, 2021 after a short illness. She was born to Lawrence Eugene (Gene) Snider and Ruby Earl (Cofer) Snider, and raised in Lawton, Oklahoma. After graduating from Lawton High School... View Obituary & Service Information

The family of Judith Frances McCurry created this Life Tributes page to make it easy to share your memories.

Judith Frances McCurry, 83, passed away peacefully on May 24,...

Send flowers to the McCurry family.