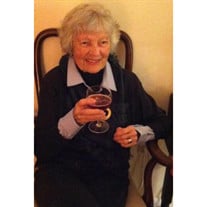 Katherine Anne Stoffel passed away on January 14, 2017 in Sarasota, Florida where she had been a resident since 2013. She was the widow of William Monfort Stoffel, an executive with H. Reeve Angell in New Jersey before the couple moved to Pinehurst, North Carolina, where they lived for thirty five years. Under the name of Kaye Lyder, she was a Broadway actress in Tunnel of Love and The Seven Year Itch, and had the distinction of appearing opposite many legendary actors on tour and in regional venues. She performed on many of the ‘golden age of television' programs such as Studio One and Hallmark Hall of Fame, and daytime television viewers saw her on As the World Turns among other ‘soaps.' A U.S.O. show tour to the Far East and Pacific Island military bases during the early days of the occupation after World War II marked the official start of her acting career. After moving to Pinehurst, Kaye wrote and performed in one-woman shows, most notably about Edna St. Vincent Millay and Louisa May Alcott. She taught creative dramatics, public speaking and organized improvisation classes for teenagers and also appeared in several productions at the Fort Bragg Playhouse. Kaye was a long-standing member of the League of Women Voters, first in New York City, then for more than thirty years in North Carolina and most recently in Sarasota. She was an active member of The First Church of Christ, Scientist in Sarasota, as well as in other Christian Science churches where she lived. As a resident of Pinehurst, Kaye was a member of the Moore County Choral Society, Sandhills Photography Club which was started by her late husband, and the Sandhills Bird Club. In addition she volunteered at the Sandhills Coalition for Human Care. Kaye Stoffel was predeceased by her husband William and their son, Jonathan, and is survived by daughter Allyson Stoffel Roe of Montclair, NJ and son Jeffrey Stoffel of Bluemont, VA, as well as grandchildren Nathaniel Roe, William Roe, and Hannah Roe, and two great grandchildren. She is also survived by her sister, Mary L. (Elle) Hunter, nephew Bruce Hunter, and niece Janet Emily Hunter, all of Sarasota. Kaye Stoffel supported the League of Women Voters, Principia College, Public Radio and Television, and The First Church of Christ, Scientist of Boston, MA, as well as several environmental and wildlife organizations.

Katherine Anne Stoffel passed away on January 14, 2017 in Sarasota, Florida where she had been a resident since 2013. She was the widow of William Monfort Stoffel, an executive with H. Reeve Angell in New Jersey before the couple moved to Pinehurst,... View Obituary & Service Information

The family of Katherine Anne Stoffel created this Life Tributes page to make it easy to share your memories.

Katherine Anne Stoffel passed away on January 14, 2017 in Sarasota,...

Send flowers to the Stoffel family.