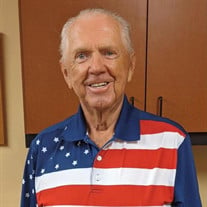 Kenneth Duane Allen, 78 of Sarasota, FL died peacefully on August 20, 2021, surrounded by loved ones. Ken was born January 18, 1943, in Sterling, IL. He was baptized and confirmed at Decorah Lutheran Church. Ken and his family grew up on a farm in Calmar, IA and this is where Ken’s strong work ethic got its start. Ken graduated from Decorah High School in 1960, he served in the US Army from 1961-1964 and later received a degree from Waterloo Business College. He married Dianne Vesterse Allen and together they had two daughters, Jodi and Angie. Ken was very proud of his daughters and their families. In 1979 Ken moved to Sarasota, FL to start his real estate career and it was a career that united him with so many wonderful friends! He truly loved what he did and was very proud of the reputation he built over the years. He lived by the golden rule, and his client’s referrals were a testament to his character and integrity. He met Mary (Blue) Shue in 2016 and they have enjoyed so much love and happiness over the past 5 years. Ken was a very proud American who loved his family, friends, country, and community and was always willing to help where/when needed. He was a dedicated steward to our country in so many ways, serving many service organizations over the years, including the Lions, Elks Club, Sertoma Club, Tidewell Hospice and others. Ken’s hobbies included spending time with family and friends, golfing, bowling, fishing, volunteering, traveling with Blue and of course playing Words with Friends. He is survived by, and the beloved Dad to, Jodi and Kendall Groenewold and Angie and Todd Meiners. He is also survived by grandchildren, Kendra Groenewold (Tanner Brinkman), Alyssa Meiners, Brady Groenewold, Tate Meiners, Thane Meiners and great grandson Bentley, all of whom he was so incredibly proud. He is also survived by his partner in life, Blue Shue who he loved dearly along with their loyal companion Stinker. He is also survived by wonderful siblings Trudy Gaffey, Sharon (Larry) Walter, Pam (Arlyn Moe) Pahl, Arlin (Margaret) Pahl, Mike (Connie) Pahl, Dan (Becky) Pahl, Deb Pahl and Fred Pahl, many special nieces, nephews, cousins, and wonderful friends who were like family! He was proceeded in death by his loving mother, Thelma Johnson Pahl and Stepfather, Ray Pahl and many other beloved family and friends. A celebration of life will take place at Toale Brothers Funeral Home, 40 North Orange Avenue, Sarasota, on Saturday, August 28, 2021 at 2 pm with a light meal to follow. A burial at Sarasota National Cemetery will take place at a later date. In lieu of flowers, memorials can be sent to Tidewell Hospice, Philanthropy Department, 5955 Rand Blvd. Sarasota FL 34238, Donate | Tidewell Foundation or the Leukemia & Lymphoma Society-Suncoast Chapter, (lls.org) .

Kenneth Duane Allen, 78 of Sarasota, FL died peacefully on August 20, 2021, surrounded by loved ones. Ken was born January 18, 1943, in Sterling, IL. He was baptized and confirmed at Decorah Lutheran Church. Ken and his family grew up on a... View Obituary & Service Information

The family of Kenneth Duane Allen created this Life Tributes page to make it easy to share your memories.

Send flowers to the Allen family.